Betting bonuses are plentiful at Bookmaker. Whether you're a new or returning player, there's free money to be had when betting on Bookmaker.

Typically, when we say "free money" in regards to an online betting site, we mean free play that requires a deposit of your own money — you know, the real kind — then extensive playthrough before that free play is able to be cashed out. Those definitely exist on Bookmaker, but so does "real free money."

Yes, we're referring to the elusive no-deposit Bookmakers bonuses. The holy grail among betting bonuses because of their rarity but Bookmaker has been known to give them out to first-time players and even loyal bettors as a "token of appreciation" during special occasions (birthday, anniversary, etc).

Over the course of this guide, we'll give you the complete lowdown on Bookmaker bonus offers — which are the best, how to redeem, plus so much more. There is honestly an offer for every type of bettor, which is what ultimately sets Bookmaker apart from so many competitors that only try to appeal to first-time players with their deals.

For starters, Bookmaker is not stingy with their Bookmaker sign up offer(s). There's a variety to choose from and each benefit from high payouts and low-ish rollover rates.

The best signup bonus Boomakers currently giving out is a 15-percent match in its sportsbook and an additional 50 percent in the casino. Only new bettors are eligible, but it's redeemable up to $1,600 — $600 for the sportsbook, $1,000 in the casino.

If you want to stick to sports, the casino bonus is completely skippable. However, why ever leave free money on the table?

Rollovers will differ between the two platforms, however. On sports, it's a modest 5X playthrough requirement, while the casino is 40X. We'll go deeper into Bookmaker rollover requirements a little later in this guide.

If depositing via crypto, Bookmaker has three sign-up bonuses to choose from:

Rollover rates will vary between the three aforementioned crypto welcome deals. The first one starts at 8X before increasing to 15X and finally 30X.

It's always best to check Bookmaker's website as they continually refresh these offers. They have a dedicated promotions page that lists every deal currently running. Value-wise, they should hover around the Bookmaker joining offers we just outlined, though.

Other Bonus Bets At Bookmaker

Bookmakers free bet no deposit required bonus is a very real thing. We have to say that because anything that sounds too good to be true typically is — except in this case.

However, the site doesn't readily advertise its Bookmaker no deposit bonus. Therefore, you won't find this in the standard promotion page next to the initial deposit and reload deals, which are always more common whether on Bookmakers or elsewhere.

We found the rare promo on the account creation page. After clicking "Join Now" on the top right-hand side of your screen, a popup appeared advertising the no deposit free bet Bookmakers promo. It was for $10 and free to use inside the sportsbook.

Perhaps a $10 bonus seems low, especially compared to the sign-up deals we just went over. That's true, but here's the thing: there's literally zero risk with no deposit bets. You don't have to deposit your own money. No rollover rates to meet. Nothing.

You simply bet and that's it. Win and you're playing with house money. Lose and, well, you actually didn't lose anything.

The pop-up window is one way to find that deal. Another is for it to be sent directly to you. This mostly only applies to the consistent players at Bookmaker. They'll get the promotion sent to them as a "thank you" for playing or perhaps during a monumental milestone — the launch of a new sportsbook feature that they want you to try or that user's birthday, for example.

At times, you'll also find a Bookmaker no devposit bonus code in a corner on the Internet. We say corner because the time it'll take you to find a promo code probably won't be worth the $10 or $20 reward. Still, if you do happen to stumble upon it, use it cause as we said, there's nothing to lose with them!

Reloads Are Also Awarded At Bookmaker

Money re-ups are rewarded handsomely at Bookmaker, too. However, these reload bonus are for loyalty program members only — in case you needed one more reason to join the program.

Like the sign-up deal, there are separate bonuses for normal money deposits and a cryptocurrency one. We'll break down each one currently running (but remember, check Bookmaker's promotion page for latest updates):

Gold members (the entry-level of the program) get a 10-percent match up to $400 on all redeposits, aside from crypto. If using a digital currency, that bonus is bumped to 15 percent and a max payout of $600.

That's actually the exact same bonus given to Platinum players (second tier of the loyalty program) on regular cash re-ups. However, here's where the value of using a crypto really kicks in. On platinum, that bonus is worth a 25-percent match up to $2,500.

Diamond members (highest level available) reloading through crypto also earn a match of 25 percent, but the max payout doubles to $5,000. Non-crypto deposits for Diamond-level players is worth just 20 percent up to $800.

So what's the moral of the story? Sign up the loyalty program and use Bitcoin to deposit money. The bonuses are worth far more when doing both — and it's not even close. Don't shortchange yourself!

When it comes to top Bookmaker offers (or any betting site, for that matter), there's always a catch. If there wasn't, its business would collapse from handing out free money to anyone and everyone that created an account.

To find out what exactly the catch is, reading the terms and conditions is mandatory (skimming doesn't count). Each offer has a specific one that will detail the rollover requirement before money earned is withdrawable, what bets go towards meeting that rollover, and so much more.

We've already outlined some of the playthrough requirements on Bookmaker bonuses. They vary widely from as little as 8X to as much as 40X. However, we do have some rollover betting tips so you can withdraw that free play earned as quickly as possible.

One is to really grasp those terms and conditions. Seriously. We had to repeat it because it's that important. You would hate to play blackjack only to find out bets placed there don't count toward reaching the rollover. Guidelines like those do exist.

Two, play early and often. Most bonuses have an expiration date — usually a month after sign-up. Don't waste any time or you'll waste the free play earned (any remaining will be forfeited if the bonus expires). 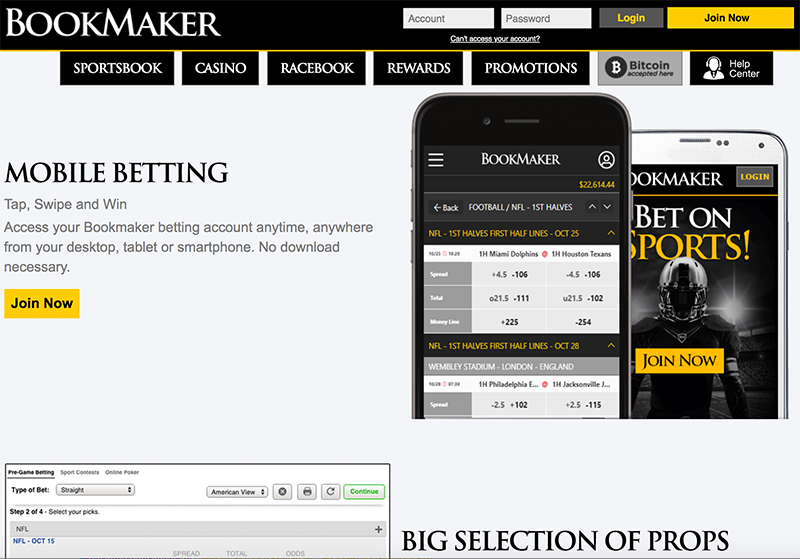 Visit Bookmaker and see for yourself... 50% Bonus 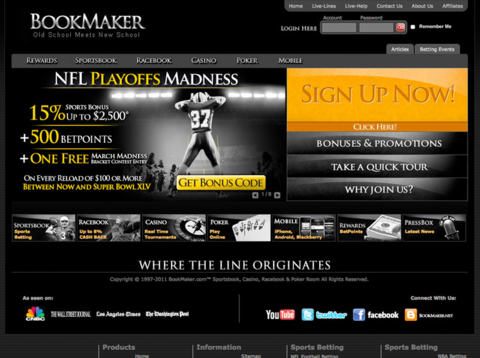