Ever come across a promotion that “sounds too good to be true” and it ends up being just that — a pipe dream? In the highly competitive world of online betting, where every site is fighting for your hard-earned money, it happens more often than any bettor would like. On this page, we will look deeply at BetUS bonuses and promotions.

On rare occasions, though, the deal ends up being the real thing. That’s certainly the case with BetUS. Without question, this betting site offers perhaps the best betting promotions across the industry — which is saying something given the crowded marketplace.

Throughout this guide, we’ll explain exactly what makes BetUS promotions so good. How much money is there to gain? What’s “the catch?” All those questions, plus more, will be covered in-depth.

Upon creating an account at BetUS, just deposit money into your account. What payment method you use — cash or crypto —determines your bonus:

We are offering you a new BetUS welcome bonus. Use promo code “TOP125” and you are eligible to receive 125% bonus on your first deposit up to $2,500 in the sportsbook.
Click here and claim the bonus now.
The conditions are:

More or less, most sign-up bonuses function in the same fashion: create an account, fund the said account, and receive a percentage of that deposit back in free play. This formula has been repeated — to much success — throughout the industry.

BetUS' sign up bonus also follows this tried-and-true formula with one caveat: the site has ramped up the match percentage and free play. To the max! Look, we weren't kidding earlier when we said BetUS is best in the business in this regard.

That's because BetUS offers a 125-percent match on first deposits made by new players. The welcome deal is split between the sportsbook (100 percent) and the casino (the remaining 25 percent). This is a far contrast to most competitors, which make their sign-up bonus specific to the sportsbook only.

That's not the best part, however. No, what really sweets this deal is the $3125 max bonus — an eye-popping number that's almost unmatched industry-wide. This killer promo can be redeemed by using code "JOIN125" while depositing.

We know what you're thinking, there have to be some strings attached, right? Well, yes and no. The free play is real, but there is a rollover requirement that must be met before the money is withdrawable. On sports, the playthrough requirement is 10X, but it skyrockets to 30X on the casino bonus portion.

It's worth noting that wagers using the free play earned do not count towards meeting the rollover. While not a deal-breaker, this does mean you'll need a good chunk of starting capital before you even think about cashing out the bonus.

It Pays To Play With Cryptocurrency on BetUS

BetUS is fully on the crypto bandwagon. It supports the use of Bitcoin, Bitcoin Cash, Etherum, and Litecoin as a payment method.

However, BetUS really proves its mettle with its crypto sign-up bonus. Yes, this is different than the aforementioned 125-percent sign-up bonus that applies to cash-based deposits only.

Believe it or not, the BetUS bonus for crypto is actually more lucrative. Matter of fact, it's an over 2X difference in terms of dollar value.

For new players making an initial deposit with crypto, they'll be eligible for a 150 percent match on that funded amount. Once again, 100 percent goes toward the sportsbook, but the remaining 50 percent is for the casino. Of course, rollover rates apply — 10X on sports betting and 30X for casino play.

But it's the max reward where things get really interesting. Get this, this promotion can reach as much as $7500 in free play — an almost unheard of award. Seriously, this might be the most lucrative sportsbook bonus on the planet, which is no small accomplishment.

To redeem this second-to-none crypto bonus, users need to enter promo code "SU150CRYPT." And for those unfamiliar with using crypto, BetUS actually has a telephone line exclusively for digital currency support. A crypto BetUS specialist can be reached at 1-800-996-7279.

Given how much more bang-for-your-buck BetUS crypto sign-up bonus is compared to its cash one, it would be really advantageous for bettors to jump on the crypto bandwagon if they're not already on it. A $4375 difference in the bonus is no small thing.

Sometimes it feels like betting sites forget about loyal players that come back time and time again to wager. They're forgotten in favor of new players, which get most of the attention when it comes to bonuses. True to form, BetUS is different from competitors in this department, as well.

Repeat players of BetUS stand to win just as much as new players thanks to the site's reload bonus. The deal ranges from 10 to 50 percent in free play depending on the re-up amount. Here's the full breakdown:

Free play earned from the reload bonus does have limitations, however. It can't be used on every single bet. Eligible wagers with the free play are straight bets (lines between -200 and +140 only), a 2-team 6-point mixed teaser, 2-team 4-point teaser, and 3-team 10-point teaser.

Not being able to use the bonus earnings on game spreads, props, or futures, admittedly does handcuff the BetUS promotion. If not for the restrictions, this reload bonus would again be an industry leader in terms of value.

No surprise here, but once again, re-ups with crypto payout more than cash ones. At BetUS, the above reloads are credited at a plus-25-percent rate when using a supported digital currency.

Seriously, if you're not already using crypto, what's the holdup? Not only will BetUS pay you more, but it even has a support line dedicated to the payment method. Not taking advantage of this deal is a costly mistake, if ever one.

Refer A Friend To BetUS For A Big Prize

Another BetUS bonus, another pool of free money to be had for a bettor. This time it's in the form of a refer-a-friend bonus.

When logged into your BetUS account through the backend, you'll find a referral section. Just enter the referee's name, as well as their email address, and a unique sign-up link will be sent their way. It's as simple as that!

If a said person registers an account, you stand to earn 100 percent of what their initial deposit was. A dollar-for-dollar match by BetUS trumps most other bookies that typically offer 25 percent and that's it. Better yet, this bonus tops out at $1000, which again, is among the highest across the market.

The referral bonus is once again split up between the sportsbook and casino, 50 percent going both ways. Playthrough requirements on the earnings are 3X for sports and 30X for the casino.

What if sports isn't your thing and you do most of your playing in the casino? Welp, there's a few deals to pick from at BetUS.

The "regular" casino sign-up bonus at BetUS is a dollar-for-dollar match (100 percent). Bonus earnings are capped at $2500. While this isn't up to snuff with the aforementioned sign-up bonus that's mostly for sports, it's still a fair amount of free play.

To earn the bonus, be sure to use the promotional code "SU100CAS." This can be applied when funding your account while logged in.

A promo of this caliber really goes a long way at the BetUS casino, which is jam-packed with slot machines and table games. Just be aware that the bonus does expire in 14 days so don't waste any time gambling at the casino.

The only games off-limits with the free play are baccarat, craps, pai gow poker, and roulette. Every other game is playable with the bonus amount.

Slot-Only Bonus At BetUS Is No Slouch

Here's a spin-off of the previous bonus, however, it applies strictly to slot machine play. If this game type is more up your alley, BetUS is dishing out a 150-percent bonus that can reach as much as $1500 in free play.

The main difference with this deal and the last is this applies to ALL deposits, not just the initial one. So think of it as a reload bonus for slot playing.

This deal is unlocked by using code "SUMMER150." A 25X rollover must be met before earnings can be cashed out, though.

Every single day on BetUS, there's at least one promotion, if not multiple, running inside the casino. Take Monday for example. On this day, BetUS is running a "Money Back Monday" and "Straight Flush 3-Card Poker" deal for would-be bettors.

The first bonus can net players up to $100 on live bet losses the weekend prior. The latter pays out straight flushes at a whopping 40X rate.

And folks, that's just on Mondays. Similar deals apply on other days including Video Poker Thursdays, Super Slots Friday, and a bunch more.

Outside of traditional bonuses, the casino also regularly runs big-money tournaments on table games. Entry fees are usually small, say a $5 or $10 buy-in, however, prizes for winners go into the thousands so it's a low-risk, high-reward play. 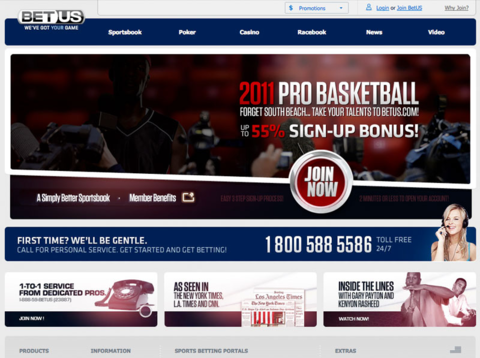 Open an Account
LEARN MORE ABOUT BetUS
DEPOSITING AT BetUS