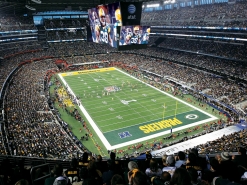 The Super Bowl is one of the biggest spectacles in the world, attracting attendees from all around the country. The upcoming championship game will be held at NRG Stadium in Houston, Texas. The stadium has a maximum capacity of 71,795, so expect a full house. However, that number won’t even come close to setting an NFL Super Bowl attendance record. Below you’ll find the top-ten most attended Super Bowls ever. Interestingly enough, most of the games happened decades ago in the Los Angeles area, with their gladiator-like stadiums.

A number of teams made multiple appearances in the top-ten list. The Dolphins led the way with four spots on the list, followed by the Steelers, Cowboys, 49ers, and Redskins all with two appearances each. Unless the Super Bowl returns to the AT&T Stadium in Arlington, this top ten list won’t change much over the next few years. NFL stadiums nowadays aren’t built like the Rose Bowl with 100,000-plus capacity. Today, a 70,000-seat stadium is the norm.