5Dimes calls themselves “the gold standard in online gaming.” But does it really live up to being one of the best online sportsbook?

We’re about to answer that very question through the course of this 5Dimes review. Nothing is off the table including its world-renowned sportsbook, full-fledged casino, payment methods, and some of the best online betting site offers.

After reading through this 5Dimes review, you’ll know exactly what to expect before you even make a wager on the site. Let’s get started! 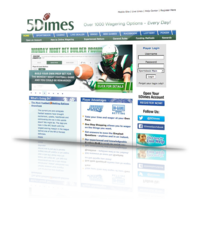 GIMME THIS BONUS! – New Players to 5Dimes can choose from one of several reward options.  Each new account is defaulted to their top reward plan, the Reduced Juice Rewards. If bonuses, cash-backs, or any other of our reward programs are more of your liking, you can contact Customer Service, which is available 24/7 via Live, to get more options.

If you’ve never heard or wagered on 5dimes before, it is perfectly normal to ask yourself, “is 5Dimes safe” or “is 5Dimes legit?”

To answer both those questions, yes and yes. Look, the 5Dimes betting site is one of the “O.G.’s” of online gambling. They’ve been in business since 1996, far longer than most competitors. Approaching their silver anniversary now, they wouldn’t have persisted so long if they were conning players out of their hard-earned money.

Now that we have that settled, what’s the legality of using 5Dimes? Do players face any repercussions for 5Dimes betting if the online gambling practice is barred where they live?

If you’re within the United States, 5Dimes is completely fair game to bet on (so long as you’re at least 18 years old). Nowadays, it’s hard to keep up with US legislation with how fast gambling laws are changing. However, no need to worry about any of that because 5Dimes doesn’t operate within US borders. It’s run offshore in Costa Rica, which means regular US federal or state policy doesn’t apply to it.

Worldwide, 5Dimes is mostly legal to use, but exceptions do apply. Some notable countries that are barred from wagering on 5Dimes include the United Kingdom, Russia, France, Portugal, and a few others. 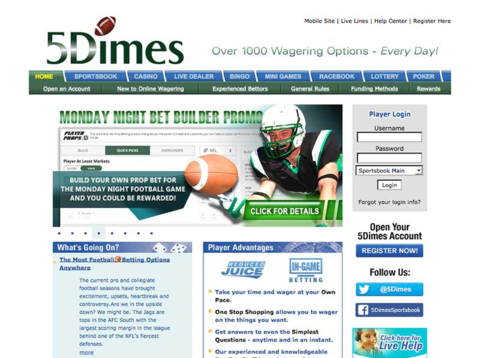 Visit 5Dimes and see for yourself...