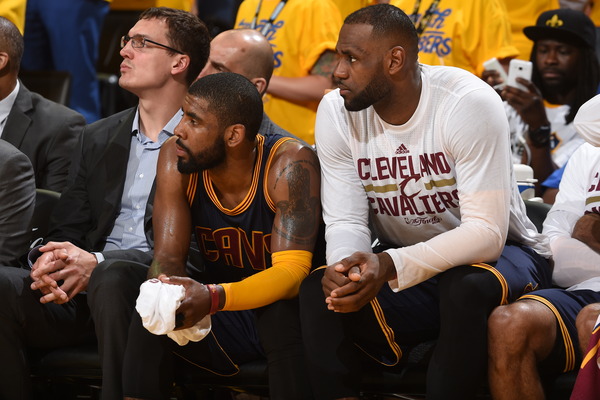 If you're like me, you have been burned in each of the last two NBA Finals games because you expected the Golden State Warriors to succesfully close out the Cleveland Cavaliers.

Ahead of Game 5, Draymond Green's suspension killed bettors, like me, who tried capitalizing on the early odds. It seemed the Warriors could win without him, so it felt like a good way of taking advantage of the situation. But while the Warriors hung tough for most of the night, they wilted in the end, bending to the wills of LeBron James and Kyrie Irving.

So, of course, entering Game 6, you thought Golden State would have a chip on its shoulder. Green in particular should have been a bat out of hell after being forced to watch the Warriors lose Game 5 from a suite at the Oakland Athletics game.

But the Warriors came out flat in the first quarter. The Cavaliers laid down a brilliant 31-11 onslaught to polish off the opening frame. The game was over before it ever started, even though Golden State flirted with coming back, cutting the lead to as little as seven points.

Now, with Game 7 on the horizon, you're left wondering whether the Warriors have what it takes to finish this thing out.

Andrew Bogut is out. Stephen Curry doesn't look right. Andre Iguodala is dealing with a back injury. Harrison Barnes' jump shot is missing. It's not an ideal situation.

This entire ordeal is compounded by James' performance in Games 5 and 6. He has absolutely destroyed the Warriors, serving as equal parts scorer, playmaker and defensive dynamo.

Still, LeBron hasn't gotten a ton of help from his supporting cast. Kyrie Irving was great in Game 5, and Tristan Thompson was otherworldly in Game 6. But no more than one of his surrounding pieces has complemented his transcendence during any given game. That's a problem, especially now, as Cleveland heads to hostile territory in Oracle Arena.

The Warriorrs, remember, havne't lost three games in a row since Steve Kerr assumed the head coaching reins ahead of last season. This is just the second time this year, meanwhile, they have lost back to back games. They respond well to adversity. It's what they do, even when they're injured and shorthanded, even when some of their key contributors, like Barnes, aren't playing up to snuff.

Golden State, then, remains the smartest play here. Knowing what this team accomplished during the regular season, and knowing how Cleveland played through the first four games of this season, one side has to hit their mean in Game 7.

And regardless of which squad that is—it could be both, for the record—it works out for the Warriors.