Belgium rolled through the round of 16 after a convincing 4-0 win over Hungary. They’ll face a much tougher task in the quarter-finals with a match against tournament-leading scorer Gareth Bale and Wales.

If there were any doubts about Wales captain Ashley Williams’ availability for the nation’s quarter-final match against Belgium, manager Chris Coleman put any worries to rest.

The defender hurt his shoulder after colliding with teammate Jonny Willams during their 1-0 round of 16 victory over Northern Ireland and was seen heavily bandaged following the match.

“He’ll be OK, it was the way he landed,” Wales manager Chris Coleman told eurosport.com. “He hasn’t dislocated his shoulder. He is not a worry or a doubt. We know we have to look after him.”

Wales will need all the help it can get against a Belgian team coming off a dominating 4-0 victory over Hungary in the round 16.

Although Belgium is the favorite, the match will be much closer than what the line indicates. This is the 12th meeting between these two nations, with Belgium holding a slight edge with five wins to Wales’ four. The teams have also battled to draws on three occasions.

Bovada has a -180 line that Belgium will pull out the victory in regulation and have Wales at +335 to accomplish the same feat. The online sportsbook also favors Belgium at +240 to beat Wales by a one-goal margin — a great value considering they are coming off a four-goal victory.

Gareth Bale scored the game-winning goal the last time these two teams played back in June 2015. Bale is tied for the tournament lead in goals with three and is a +200 favorite to score at any point of the match.

Bale is also a +260 favorite to score his team’s opening goal of the game — something the Real Madrid star has done twice so far in the tournament. 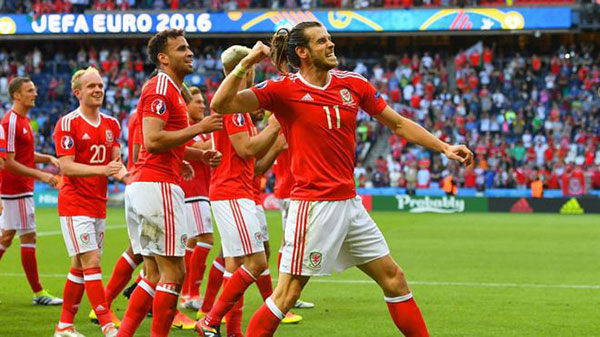 Romelu Lukakuu remains Belgium’s best offensive weapon as Bovada has the striker at +200 to score his team’s opening goal. Captain Eden Hazard is starting to find his offensive game at the tournament and is a threat to net a goal against Wales. Bovada pegs the Chelsea forward at +210 to score at any point of the match.

As the two highest scoring teams in the tournament prepare to do battle — Belgium leads with eight, followed by Wales at seven — this match has the potential to produce several goals.

Belgium may have run away with their last victory, but Wales will present a much tougher challenge for Marc Wilmots’ side. Bale will give Belgium defender fits, but it won’t be enough for Wales to get through to the semifinals.