Host nation France will have its hands full when they face Ireland in a highly anticipated round of 16 match on Sunday. While France remain heavy favorites, Ireland is looking to continue its magical run at Euro 2016.

Ireland defeated one international soccer giant, but can they do it again? Coming off an impressive 1-0 defeat over Italy to book its place in the round of 16, Ireland will have a great task in the knockout stage when they take on host nation France.

“We need a performance like tonight again to stand a chance,” Ireland manager Martin O’Neill told eurosport.com following their win over the Italians.

While Ireland squeaked into the knockout stage on the final day of action, France qualified in much easier fashion by topping Group A with a pair of victories and a draw.

France has won seven of the previous 16 meetings between the two countries, while Ireland has won four times. This will be the first time the two teams will clash at a European Championship.

Didier Deschamps’ side is a heavy favorite to win this game as Bovada has France at +300 to win by a two-goal margin.

Dimitri Payet has two goals in the tournament and will once again be one of France’s best scoring threat. Bovada has a Payet at +300 to score the first goal for France. The online sportsbook also pegs French strikers Andre-Pierre Gignac and Olivier Giroud at +160 favorites to score at any point of the match. 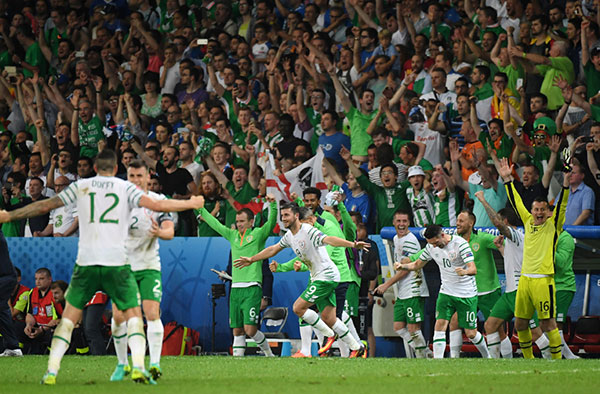 For Ireland, Shane Long is a +500 favorite to net a goal during the match, followed by Robbie Keane at +600.

France, which has only conceded one goal in the tournament, is -130 favorites to record a shutout victory.

This is new territory for the Irish team, which is competing at its third European Championship and has progressed to the group stage for the first time.

France will have its hands full with a scrappy Irish side looking to continue its historical run. However, France’s firepower and a steady defensive unit will be too much for Ireland to overcome.