Here are a few NHL betting options for Saturday night games, with odds courtesy of Bet365.

After a sizzling start to the season, the Edmonton Oilers will try to end a three-game losing skid Saturday night when they travel to Brooklyn for a date against the New York Islanders.

The Isles — losers of two straight games — enter Saturday’s contest as the -135 favorites. Due to the mini slump, Bet365 is offering a +115 line for the Oilers, who lead the Pacific Division with 15 points.

Oilers star forward Connor McDavid is among the league leaders in points with 13, however the sophomore sensation has a minus-6 rating in the last three games.

New York’s four wins this season have all come on home ice and the Isles will be looking to climb out of the Eastern Conference basement with a victory.

These two clubs don’t meet regularly, but the head-to-head series over the last 10 games has been split down the middle. The Isles have a slim advantage with a 5-4-1 record heading into Saturday’s clash. New York has averaged 32.70 shots per game during that span.

If you’re putting your money on an over/under wager, Bet365 has set the total line at 5.5. Considering the last eight of 10 meetings between the clubs have produced under results, staying the course may be a wise decision. But not when the Oilers are due for a breakout game. Take the over. 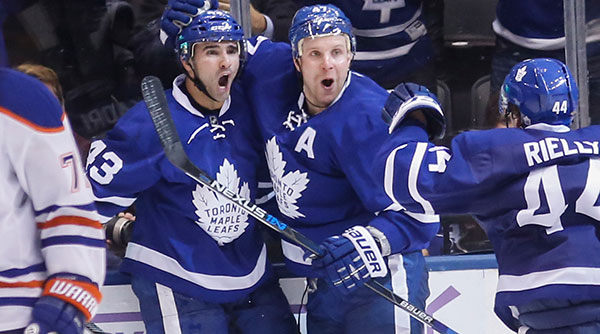 It’s not every day the rebuilding Maple Leafs are favorites to win a game. But riding a two-game winning streak, that is just the case as the Leafs host the slumping Vancouver Canucks at the Air Canada Centre on Saturday night.

Bet365 has a short -200 line in favor of the Leafs, who have won two straight games for the first time this season. The Canucks have been in a downward spiral since opening the season with four consecutive victories. Losers of seven straight and counting, the Canucks enter Saturday’s match as the lowly +170 underdogs.

It’s hard to win when you can’t score and that’s been the case for these Canucks, who rank last in the league with 16 goals, averaging a measly 1.45 tallies per game.

It seems like the perfect moment for 2016 No. 1 overall pick Auston Matthews to shake off of his scoring slump as the Leafs rookie has been held without a point over the last five games.

The Canucks have posted a 6-4-0 record against the Leafs in their last 10 meetings, but Toronto has won the last two contests.

The over/under line for Saturday’s match is set at 5. Three of the last four games between the Leafs and Canucks have produced over outcomes.

Two teams battling for an early season wild-card spot will face off on Saturday as the Los Angeles Kings play host to the Calgary Flames at the Staples Center.

The Kings go into Saturday’s Pacific Division showdown as the -156 favorites according to the Bet365 line. The Flames have dropped two of their last three games but are coming off a huge road win against the San Jose Sharks — the first of a three-game Western road trip.

The Flames — the +110 underdogs — haven’t beat the Kings in Los Angles since a Dec. 22, 2014 victory. The regular-season series between the two clubs has been fairly even, with the Kings holding a 5-3-2 record over the last 10 games.

Kings captain Anze Kopitar has enjoyed playing the Flames throughout the years, scoring 32 points in 41 career games against Calgary.

The over/under line has been set at 5.5, but keep in mind four of the last five meetings between the Kings and Flames have gone under. Calgary is bound to win in a close, low-scoring game.