Will The Caps Live To Fight Another Day? 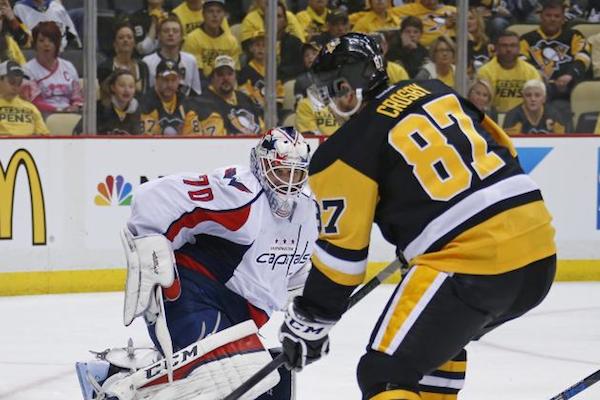 Winning Game 5 on home ice, the Capitals forced a Game 6 for the fifth time in team history when trailing 3-1 in a series. They've gone on to win two of those previous five series. The Penguins have twice lost series that they led 3-1. On paper and in analytical assessment, the Capitals have been the better team for much of this series. Washington captain Alex Ovechkin, who garnered a goal and an assist in Game 5, has five points, more than Pittsburgh's 1-2 punch of Sidney Crosby (two) and Evgeni Malkin (two) have combined.

Capitals forward T.J. Oshie also had 1-1-2 numbers in Game 5. Oshie's goal was his fifth in 11 games of this postseason, matching his totals from his first 30 career Stanley Cup games. He has four goals in this set and both game winners for Washington. Ovechkin netted his 13th career Stanley Cup power play goal in Game 5, tying Peter Bondra for the all-time franchise lead. Capitals defenceman John Carlson is riding a five-game points streak. Washington goalie Braden Holtby has allowed one goal or fewer in 18 of his 22 career playoff wins.

Crosby collected his 82nd career postseason assist in Game 5 to tie Jaromir Jagr for second on the Penguins all-time list. Although he endured his first sub-par game of the playoffs, allowing three goals on 19 shots, the Penguins will stick with rookie Matt Murray in goal even though veteran and past Stanley Cup winner Marc-Andre Fleury is available.

Washington opted to split up Ovechkin and centre Nicklas Backstrom in Game 5, putting struggling Evegeny Kuznetsov with Ovechkin, and the shuffle seemed to ignite them. By contrast, Pittsburgh tried splitting up Crosby and Patric Hornqvist to get them going and it had no effect. Crosby and Hornqvist were reunited in practice Monday. Tom Kuhnhackl, who played on Crosby's line in Game 5, returned to the fourth line with Bryan Rust and Matt Cullen.

The Capitals will welcome back defenceman Brooks Orpik, who has served his three-game NHL suspension for his Game 2 hit on Pittsburgh defenceman Olli Maatta. Maatta, who hasn't played since suffering an upper body injury from the hit, is a game time decision.