The Pittsburgh Penguins-Washington Capitals series switches locales to Pittsburgh deadlocked 1-1. Penguins captain Sidney Crosby and Alex Ovechkin, his Washington counterpart, have one point each in the set. Is this the night one of them breaks out? 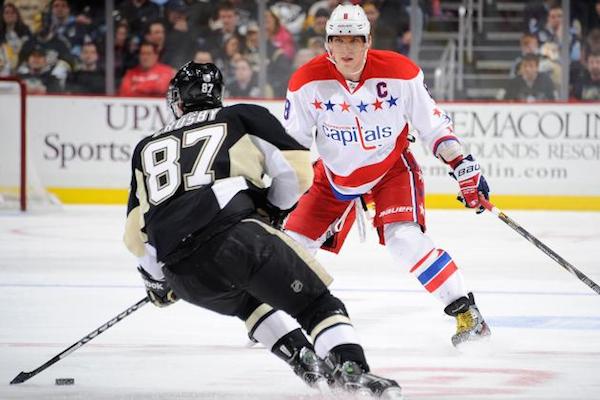 As action switches to Pittsburgh's Consol Energy Center, will the Penguins, now that they hold the advantage of the last change, stick with the same matchups or look to get Sidney Crosby away from Alex Ovechkin? Washington coach Barry Trotz opted to go strength against strength, playing his top line against the Crosby line, while leaving Jay Beagle's unit to deal with Evgeni Malkin.

While those lines basically were a saw off during the first two games, Crosby and Ovechkin limited to a point apiece, Pittsburgh's third line of Nick Bonino, Carl Hagelin and Phil Kessel has combined for three goals and seven points through the first two games.

Game 2 was also a tale of former players. Ex-Capital Eric Fehr scored the game winner for the Penguins, while former Penguins defenceman Brooks Orpik drew the ire of the NHL for his head shot on Pittsburgh defender Olli Maatta, resulting in a three-game NHL suspension. The likely means Dmitry Orlov, a healthy scratch in favour of Taylor Chorney for Game 2, draws back in for the Capitals. Maatta (head injury) won't play, meaning either Derrick Pouliot or Justin Schultz come in for the Penguins.

Pittsburgh rookie goalie Matt Murray continues to write a Cinderalla story. He's 11-1 in his last 12 decisions dating back to March 6 and 4-1 in the playoffs with a 1.74 goals-against average, .939 save percentage and one shutout. Murray is the first rookie goalie to win four of his first five Stanley Cup decisions since Michal Neuvirth did it for the Capitals in 2011.

Malkin has points in all six playoff games he's played since returning to action from a knee injury and leads the Penguins with 3-6-9 totals. Penguins defenceman Kris Letang logged 35:22 of ice time during Game 2, the highest total posted by any player thus far in the Stanley Cup playoffs and the third time in the postseason he's skated at least 30 minutes in a game. He could wear down as the series progresses.