The San Jose Sharks did what they had to do in Game 5 of the Stanley Cup final, winning in Pittsburgh to send the series back to San Jose. Now if they can hold home ice, it’s back to the Consol Energy Center for a winner take all Game 7. 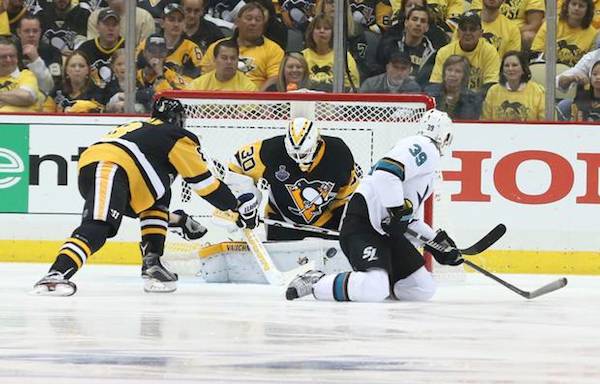 For the first time in the 2016 Stanley Cup final, the San Jose Sharks played with a lead and the end result of that led to a victory that allowed them to survive to fight again, forcing the series back to San Jose's SAP Center for Game 6.

This is why teams so emphasize the approach of taking it one game at a time in the playoffs. The road to a title doesn't appear nearly as imposing now for the Sharks, who if they can take care of business in Game 6 on home ice at the SAP Center, will send the set back to Pittsburgh for a Game 7.

But here's the rub. As much as the Sharks are fired up about winning for the first time in regulation time during the series, they have to be realistic and recognize were it not for the work of goaltender Martin Jones in Game 5, we'd have all seen the night end with Penguins captain Sidney Crosby skating a victory lap around the Consol Energy Center, Lord Stanley's mug held aloft.

After San Jose took a 3-2 first-period lead, their series-long problems with Pittsburgh's speed and depth of skill players re-emerged and if it were not for the stellar work of Jones, who became the first netminder since the 1967-68 NHL expansion to post multiple 40-save efforts in a Stanley Cup final series, the night and series would have been lost. Jones has done that in both of San Jose's wins in the series, so the odds are he'll need to be brilliant again for their to be a Game 7.

On paper, the Penguins were the much better team in every aspect of Game 5 save the scoreboard. Pittsburgh outshot the Sharks 46-22 and held a 76-36 edge in shot attempts. Analytically speaking, there wasn't a single San Jose player who finished the night with a positive Corsi rating.

The Sharks have made hay throughout the playoffs by utilzing their big group of forwards to get the puck deep in the opposition end and grind on the defense, wearing them down to ultimately create chances for their skill players. In theory, this gameplan should work against a Pittsburgh defense that is neither deep nor outstanding, but the Penguins have simply kept the Sharks on the back foot and not allowed them to play to their strengths.