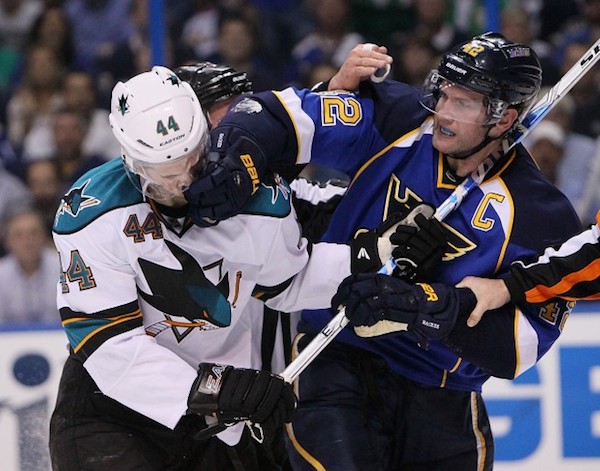 The good news for the St. Louis Blues is that they played their best game of the Western Conference during a 6-3 win in Game 4 at San Jose's SAP Center. THe bad news is they may have to continue to play the series minus two of their key players.

Captain David Backes and rookie forward Robbie Fabbri did not finish the game after suffering undisclosed injuries. Backes did not return to the ice after the first period with a suspected leg injury, while Fabbri, who was hit hard by San Jose forward Tommy Wingels, played less than a minute in the third period. The Game 5 status for both players is uncertain. Backes shares the team lead in goals at seven with Troy Brouwer and Vladimir Tarasenko, while Fabbri leads the team and all NHL rookies with 14 points. The Blues are already without forward Scottie Upshall, who has missed two straight games with an undisclosed injury.

Forward Matt Nieto, out since Game 6 of the second round against the Nashville Predators with an undisclosed injury, is the only ailing Shark. This is the fifth time the Sharks have arrived at Game 5 of a series tied 2-2 and they are 4-9 all-time in this scenario. It's the fourth successive spring the Blues have played host to a Game 5 deadlocked 2-2 in the set and they are 0-3 on each of the previous three occasions - against the Los Angeles Kings in 2013, versus the Chicago Blackhawks in 2014 and the Minnesota Wild in 2015, all in first-round series. The Blues did win Game 5 at Dallas in the second round this spring when tied 2-2 in the series.

St. Louis forward Kyle Brodziak scored twice in Game 6, his first points of the playoffs, ending a 27-game goalless streak in Stanley Cup play. Game 4 saw Sharks goalie Martin Jones hooked from a game for the first time in the playoffs. Expect Jones to be back in the net for Game 5 while the Blues will go with Jake Allen, who made his first start of the playoffs in Game 4. The Sharks won an NHL-high 28 road games during the regular season but are just 4-4 on the road in the playoffs, worst mark of the four teams left in the hunt for the Stanley Cup. The Blues are 4-5 at home in postseason play.