The college football season comes down to one game and it’s a familiar matchup. See our preview and why this Clemson-Alabama matchup might be different from a year ago.

Who remembers the classic between these two last year? The ballsy onside kick call from Nick Saban? The 405-yard passing and 73-yard rushing performance from Deshaun Watson? The Tide winning their fourth championship in seven years in a 45-40 victory?

It's on again and the grudge match will be the first time in 19 years the same two teams will meet for the national championship in consecutive seasons. Will the result be any different?

Alabama enters the game in an all-too-familiar place, as the favorite. The Tide are favored by six-and-a-half points over Clemson. That's the benefit of the doubt you earn when you have won 26 games in a row.

Both teams had a dominating performance in the college football playoff semifinals. Alabama routed Washington 24-7, while Clemson shutout Ohio State 31-0.

Like they have all season, the undefeated Crimson Tide beat the Huskies with suffocating defense. After allowing a TD on the first series, Washington tallied just 130 yards the rest of the way. Moreover, Alabama's defense bailed out a struggling offense with three turnovers, including a pick-six interception. The defensive score was the Tide's 11th of the season.

All in all, the defensive units lead the nation in total defense, rushing defense, and defensive scores.

The only chink in Alabama's armor appears to be at the most important position, quarterback. Jalen Hurts struggled mightily against Washington, completing 7-of-14 passes for 57 yards, along with 50 yards on the ground. Hurts rarely makes mistakes, but he's not going to beat you, either.

That's a far cry from the Tigers' signal caller. Watson, after an up-and-down regular season, is peaking at the right time. Against the Buckeyes, Watson accounted for three touchdowns and this will likely be the Heisman Trophy runner-up's last game of his collegiate career.

His best target Mike Williams missed last year's national championship, too. An injury sidelined Williams most of last season, but he's picked up where he left off. In 2016, he's caught 90 passes for 1,267 yards and 10 scores. 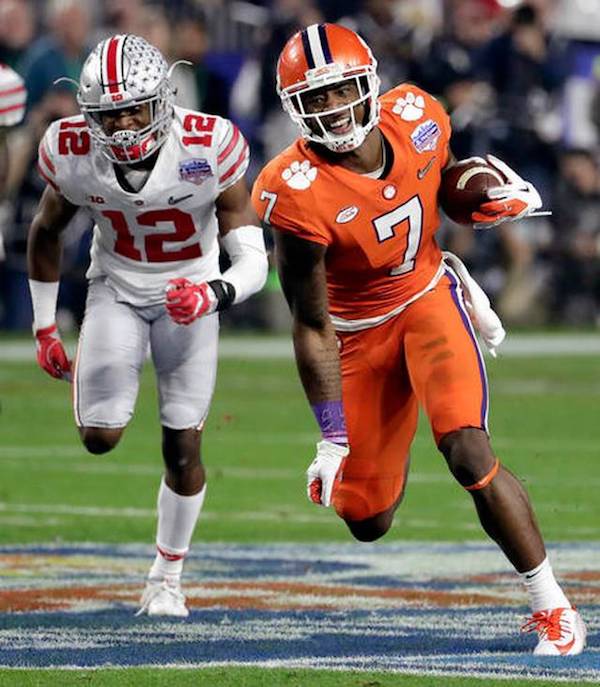 This will also be a chess match between two of the game's best minds — Saban and Dabo Swinney. Both head coaches are chasing history, too. With a win, Saban would join Bear Bryant as the only college football coach with six national championships. Meanwhile, Swinney would stick it to his former team — he played wide receiver in college and served as a coaching assistant in Tuscaloosa — and bring home the first title to Clemson since 1981.

Furthermore, Alabama will be without offensive coordinator Lane Kiffin. Play-calling duties will fall on Steve Sarkisian, as Kiffin is off to Florida Atlantic to serve as their head coach. It's not clear if Kiffin was fired or quit, but the early exit was surprising considering Kiffin called plays against Washington and vowed to finish the year out.

Either way, Kiffin's departure is a glitch in "the process" Saban preaches, and maybe a sign there's a crack under Alabama's surface.

With shaky play from Hurts and a new play-caller, Alabama's offense is especially vulnerable. The pressure will fall on their latest star running back Bo Scarbrough. The six-foot-two and 228-pound bruiser, with shades of last year's Heisman winner Derrick Henry, gashed Washington for 180 yards on the ground, including a backbreaking 68-yard touchdown. 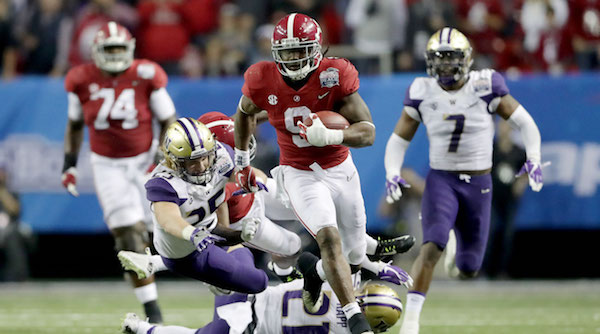 However, Clemson's defensive front is no joke. The big and speedy line harassed Ohio State throughout the Fiesta Bowl, holding them to 215 yards and just nine first downs. The defensive line broke into the backfield for 11 tackles for a loss and three sacks. It was the first time the Buckeyes were blanketed since 1993.

Yards won't come easy for Scarbrough against the Tigers. By comparison, Ohio State averaged 258 yards on the ground per contest during the regular season. Against Clemson, they mustered 88.

This clash has all the makings of a heavyweight fight — history at stake, offense vs. defense, elite players, top-tier coaching. Expect a close one, but Clemson matches up well against the Tide and Watson can break their top-notch defense. It's a bold pick but the Tigers will extract revenge and stop a dynasty in its tracks.