Thursday brings a busy slate of NHL action, with a dozen games on tap, some fascinating match ups, a number of the league’s top teams on the ice and some intriguing wagering options. 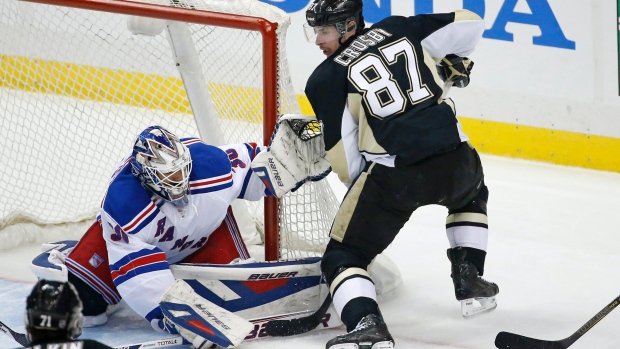 Rangers goalie Henrik Lundqvist posted his 58th NHL shutout and fourth vs. the Penguins on Feb. 10. Jesper Fast (flu) and Rick Nash (leg) are out for New York. Newly-acquired Penguins D Jeff Schultz has cleared up his immigration issues, but it's uncertain whether he will play. Pens are 6-2-1 in their last nine home games against the Rangers.

Oilers have won two in a row and beat Flyers 4-2 Nov. 3, the game in which Connor McDavid suffered a fracture clavicle. Tuesday's win in Buffalo ended an 0-4-1 road skid. Flyers have won three straight and goalie Steve Mason is 3-0 vs. Oilers with a 1.95 GAA and .923 save percentage.

Leafs are playing their third game in four nights have lost three straight and are 1-4-0 in their last five. Nazem Kadri has seven points in his last six games. The Wild beat Colorado 6-3 in their last game to take over the final wildcard spot in the West.

Jack Capuano's next win will be the 200th for the Isles coach. Defenseman Johnny Boychuk was hit in the face with a puck in Tuesday's win at Vancouver. Casey Cizikas is riding a five-game point streak. Jets plan to give young forwards Nikolaj Ehlers and Mark Scheifele signficant ice time against the Isles' top line to test their mettle.

Ducks are 16-1-1 in their last 18 games and have won nine in a row. Their 12-1-1 February was the best month in franchise history. Stumbling Coyotes have lost six straight.

The next point for Panthers winger Jaromir Jagr will tie him with Gordie Howe for third in all-time NHL scoring. Jagr and Reilly Smith (21) share the Florida goal-scoring lead. Avs will start back-up goalie Calvin Pickard.

Joe Thornton, Brent Burns and Joe Pavelski all had three-point nights in San Jose's 6-2 win over Montreal. Canucks forward Alex Burrows has gone eight games without a goal.
Vancouver is 2-6 in its last eight.

Canadiens have confirmed rookie forward Michael McCarron will stay with the big club the rest of the season. Tomas Plekanec (214) needs one goal to tie for 20th in Habs career goals. Andrei Markov (526) is one assist away from 20th overall in career assists. Kings are 4-1-1 in their last six.

Dale Weise is expected to make his debut as a Blackhawk. Bruins are a disappointing 14-16-3 at home.