Who Is Going To Win The ALCS?

The Blue Jays and Indians are four wins away from winning the American League pennant. Find out who our pick to represent the AL in the World Series is. 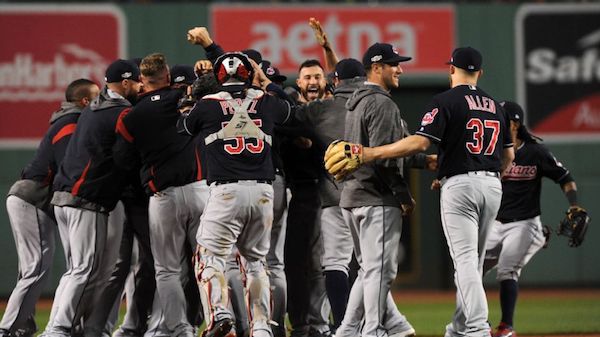 A week ago, both the Indians and Blue Jays were heavy underdogs in the ALDS. Today they stand four wins shy from punching their ticket to the World Series.

Cleveland kept the best offense in the majors, Boston, in check, holding the Red Sox to a paltry seven runs in a series sweep. Meanwhile, it took a walk-off home run in extra innings for Toronto to escape the wildcard game, before they outscored the top-seeded Rangers 22-10 in a series sweep of their own.

The two ALCS foes are evenly matched. In the regular season series, the Indians edged the Jays 4-3. We could very easily be headed for a Game 7 in this one, too.

The Blue Jays high-powered offense might be the difference against the Tribe. Let's not forget how explosive Toronto's offense was a year ago when they led the majors in runs, homers, OPS, and just about every other major category. An injury to star player Jose Bautista slowed them down in 2016, but their bats have been awakened.

Texas' potent pitching duo of Yu Darvish and Cole Hamels — the best one-two punch in the AL — were no match for Toronto's boom sticks in the ALCS. Sixteen of the Blue Jays' 22 runs in the series came off the Rangers starting pitchers. Overall, they notched 14 extra-base hits and eight homers in the three games.

Toronto's lineup is stacked as is, but they'll be facing a very vulnerable pitching rotation from Cleveland. The Indians will be missing starting pitchers Carlos Carrasco and Danny Salazar the entire series. Both aces are sidelined with a broken hand and strained forearm, respectively.

Then again, the absence of Carrasco and Salazar didn't hurt the Tribe against the Red Sox. Miraculously, Cleveland pitchers shut down Boston's league-leading lineup. Not only did the Red Sox score a meager seven runs, they also batted a paltry .136 with runners in scoring position during the sweep.

The question is, can Cleveland's pitching staff duplicate that dominating performance? Seven-game series are an entirely new animal compared to five games. With an extra two games, pitching depth becomes even more critical. There are serious question marks whether the Indians have enough arms to slow down a red-hot Blue Jays lineup.

The burden will fall on the Tribe's relief pitchers Cody Allen and Andrew Miller. Both are two of best AL pitchers out of the bullpen, but the extra pitches could take a toll.

Toronto's rotation doesn't have nearly as many red flags. While the Jays lineup finally came to life, their pitching has been a model of consistency all year long. With a combined ERA of 3.78, Toronto starting pitchers had the lowest ERA in the AL this year. Four legit starters — J.A. Happ, Aaron Sanchez, Marco Estrada, and Marcus Stroman — round out the Blue Jays staff. Both Sanchez and Estrada are 2016 All-Stars and Happ has playoff experience.

The Blue Jays bullpen is no slouch either. In four postseason games, they've tossed 14 innings to the tune of a 1.29 ERA.

Toronto's pitchers will have a tough test against the Indians, who racked up the fifth most runs in the majors during the regular season. Unlike the Jays, Cleveland doesn't rely on power. Instead, their balanced lineup that features Mike Napoli, Carlos Santana, and Francisco Lindor, among others can score in a multitude of ways. The Indians lineup isn't as prone to going cold like the Jays.

Cleveland, in Terry Francona, have an experienced, tactical genius. This isn't Francona's first rodeo, nor his last. He led Boston to two World Series crowns before and has done a masterful job thus far. There's a huge gap between Francona and Toronto manager John Gibbons.

Beyond Francona's unconventional bullpen management, his decision to rest starters the last week of the season rather than fight for home-field advantage is paying dividends. Not only are players well-rested, they ended up notching home field anyway.

All things considered, there's no clear-cut favorite, however, I expect Toronto's struggles to finally end as they advance to the World Series in six games. The Blue Jays have two clear advantages over the Indians — deeper pitching and a more potent lineup. A deeper starting rotation and reliable bullpen from Toronto will wear out the Indians in a seven-game series. Moreover, the Jays lineup can change any game with a single swing of a bat.