Online gambling has absolutely exploded in Canada over the last decade. One of the betting sites leading that surge in popularity is none other than Sports Interaction. Matter of fact, the site is largely exclusive to Canadian players.

So how does the premier Canadian gambling site fare when it comes to offering bonuses and promotions to players? If we’re being completely honest, it could do a whole lot better.

That’s not to say they don’t reward players with some free money here and there. However, compared to many competitors, their bonuses feel like peanuts.

Over the course of this guide, we’ll give you the full rundown on Sports Interaction’s “lackluster” bonus offerings. Who can claim them? What’s the monetary value? What rules and guidelines apply?

You have questions, we have answers!

In today’s hyper-competitive betting market, welcome bonuses are almost necessary for online sportsbooks to keep pace with competitors. By and large, you can copy and paste these sign-up bonuses from site to site because they work in the exact same manner: create an account, make a first deposit, and earn free play right back.

The only difference — but a big one at that — between these introductory deals is the match percentage and max payout offered. It will vary at each book and that’s ultimately what makes one better or worse than the other.

At Sports Interaction, the first-time deposit bonus is matched at 100 percent for up to $200 Canadian dollars in free bets. Therefore, it would require a $200 deposit to earn the max bonus. That’s a high risk for a small reward, which is always a betting no-no in any capacity, little less for a promotion.

With that said, we’re not going to mince words here, but the Sports Interaction bonus on signups is not the best on the Internet today. Where do we even start with this one?

All this for a measly $200 payout. Just for comparison, the best betting site offers can earn first-time bettors as much as $1000 — no, that extra zero is not a typo, either.

Oh, and you won’t need a Sports Interaction bonus code to redeem. Instead, it’ll be applied automatically when depositing cash. We guess that’s the only other positive out of this (mostly) underwhelming bonus.

The new member bonus is valid for only 30 days upon sign-up. After this timeframe, any remaining bonus funds will be forfeited. Given the lack of rollover, a month’s time is more than enough time to exhaust the bonus.

Bonuses, whether at Sports Interaction or elsewhere, are ever-changing. Updating them ever so often is how betting sites stay competitive in the crowded marketplace.

That’s why we always advise visiting the website, in this case Sports Interaction, directly in case things have changed since our writing. Betting platforms have very little incentive in hiding their promotions anymore. If they have one running, they’re advertising it heavily throughout their website, especially through banner ads or homepage graphics.

However, there are a few dates when you can expect a bonus promotion to refresh. This will revolve around big sporting moments that attract a ton of betting attention. Casebook examples include the start of football season (late August to early September), the Super Bowl (beginning of February), and NCAA March Madness (you can probably guess what month that is).

It’s during these peak interest moments that betting sites like Sports Interaction will actually up the rewards of their bonuses. The aforementioned 10-percent bonus up to $100? Yeah, that’ll suddenly balloon to a 15 or 20 percent match. Heck, a Sports Interaction 100 bonus isn’t unheard of either.

Just like there are good times to buy a car (e.g. end of the year), the previously-mentioned examples are the best times to sign up for a betting site if you’re looking to maximize free play winnings.

Since we’re on the topic of seasonality, we’d be remiss not to mention Sports Interaction will roll out other promotions (besides sign-up) during key betting periods.

For instance, during the NFL season, Sports Interaction is known to run a weekly pick-em pool for bettors. No, these aren’t bonuses in the traditional sense, but they remain money-making opportunities outside the traditional sportsbook.

Anyway, the contest for correctly picking the winners of each NFL game that week ran the entire regular season. Instead of a winner-take-all format, prizes were dished out to bettors that placed in the top-20.

That’s just one example, but something you can expect out of Sports Interaction during certain times of the year.

The casino at Sports Interaction is absolutely stockpiled with games, not unlike those you’d find in Las Vegas. All in all, there are more than 200 games at the player’s disposal.

Currently, the site is offering a full 100-percent match on a player’s first-ever deposit into the casino. This deal is capped at $200 CAD, but already more bang for your buck than the aforementioned sportsbook counterpart.

You will need a Sports Interaction promo code to unluck this casino deal. It is “FIRST100” (without quotation marks) and can be used during the deposit process. Bonus money will be credited to your account immediately.

Whether you’re claiming a bonus in the sportsbook or casino, it’s strongly advised you read through the terms of conditions first. And we mean read, not just skim over it.

You see, “free” money is usually never free. There’s always a “catch” if you will. And this is not just at Sports Interaction, but throughout the whole industry for that matter.

While betting sites readily advertise match percentages and max payouts of bonuses, the fine print gets thrown into the terms and conditions statement. Here, you’ll find pertinent info such as meeting rollover requirements, not just in the total wagering needed, but what games actually count toward it.

Spoiler alert: not all games do. Exceptions typically apply in the casino where games like roulette or blackjack are either excluded entirely from counting toward the rollover or discounted steeply.

The terms and conditions will outline these rules and anything else pertaining to that bonus. Each promo has its own statement so pay close attention.

Any and all referrals to the site will reward you with a 20-percent bonus up to $200. That bonus is calculated off the referred person’s first deposit. Therefore, to earn the full $200, they’ll need to insert at least $1000.

When logged in, you’ll see a Sports Interaction referral code in your account. This is what you’ll give to your friend and what they’ll key in when creating an account. Bonus money will be credited to your account as soon as they’re done signing up. It’s as simple as that!

But the best part? There are zero limits to redeeming this bonus. Conceivably, you can earn this bonus for as long as Sports Interaction is around. 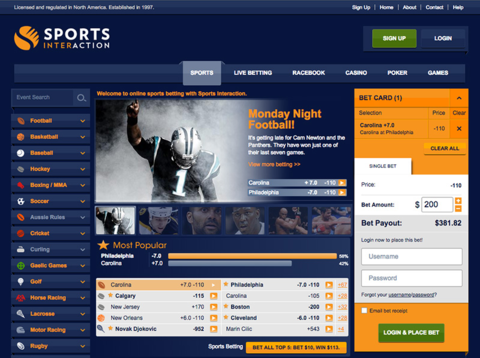