Conor McGregor is barely about to turn 29 years old, but he’s already the biggest UFC star of all time. You don’t reach that level of success without having a big mouth. Here are the six greatest McGregor quotes of all time.

Conor McGregor: The best self-promoter of all time?

Can we all agree the most entertaining aspect of the upcoming Conor McGregor-Floyd Mayweather fight won't be in the ring? Instead, it'll come in the pre-fight banter between two of the biggest trash talkers in combat sports history. The verbal jousting we're about to witness will be the stuff of legends. 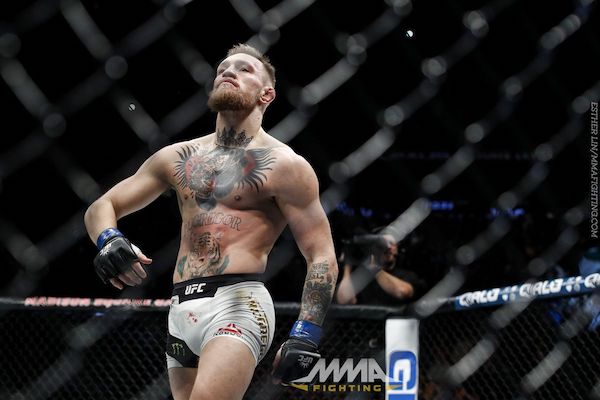 While boxing has a storied history of big mouths, McGregor is in a league of his own in the MMA world. Akin to the punches and kicks he throws in the octagon, McGregor's inflamatory quotes come in flurries — which has helped propel him to super stardom. He's broken his own records for live gate revenues, pay-per-view buys, and nearly every other metric.

We picked the most memorable McGregor lines to date, but don't be surprised if McGregor adds to this list in the buildup for his showdown with Mayweather.

It's hard to believe that McGregor was a relative unknown just three years ago. That all changed on UFC Fight Night 46.

The event was hosted in McGregor's hometown of Dublin — only the second time the UFC had organized a card in Ireland. McGregor ended the night with a knockout victory, the fourth win for an Irishman on the night. The win not only put McGregor on the map, but all fighters from his country.

"Talent doesn't exist. We are all equal as human beings. You could be anyone if you put in the time. You will reach the top, and that is that. I am not talented. I am obsessed."

McGregor's rise to the top is a true rags-to-riches story. One week before his UFC debut, McGregor was still collecting social welfare from Ireland — 150 Euros to be exact.

About four years later, McGregor stands to make in the ballpark of $100 million from fighting Mayweather. And according to McGregor, that success isn't down to innate ability. He earned every penny by obsessing to be the absolute best.

"It's all in the ball sack. I just have that confidence that comes from my big sack, and I know when I smack you, you're going down. And that's it."

Not many are giving McGregor a fighting chance against Mayweather. However, in a sport where anything can happen, the possibility of a McGregor knockout lingers.

After all, McGregor has built a second-to-none UFC career off knockout blows, not choke holds. All but two of his UFC wins have come from strikes, especially with his left hand. Apparently McGregor musters that power from a special area of his body...

"I would invade his favela on horseback."

I mean, does it get any more offensive than this? Mind you, McGregor mouthed this in Rio De Janeiro — Aldo's native country — to the chagrin of a frenzied Brazilian crowd. McGregor went on to say he "owned" the city.

McGregor's trash talk seemed to peak in the buildup to this fight and it appeared to get in Aldo's head, too. How else do you explain a 13-second knockout win for McGregor? There's something more to a decade-long undefeated streak being snapped — and it's likely McGregor getting into Aldo's psyche.

To say the UFC 202 press conference went off the rails would be an understatement. This was all-time crap shoot.

For starters, McGregor showed up for his own presser a whopping half hour late. It ended abruptly, too, as Nate Diaz stormed off the stage.

With Diaz far off stage, the two exchanged curse words, including the McGregor zinger. Suddenly, water bottles also flew back and forth, which earned McGregor a hefty fine.

UFC 205 was a record-breaking night on all fronts. The first-ever UFC card in New York City was the highest-grossing live gate in the promotion and the Garden's long history. And with a win over Eddie Alvarez, McGregor became the first fighter in UFC history to hold two titles simultaneously.

Following the historic night, McGregor offered no apologies in the post-fight interview for his off-the-wall behavior through the years — nor should he.