The best pound-for-pound fighters in boxing and MMA Floyd Mayweather and Conor McGregor will collide in a blockbuster fight for the ages. We preview the bout, along with a breakdown of the best bets.

Both these men have made history in their respective sport. On one hand, you have Floyd Mayweather with his unblemished 49-0 record. Likewise, Conor McGregor is the only UFC fighter in history to hold two championships in separate weight divisions simultaneously. The two will put their legacies on the line against one another on Aug. 26 in a 154-pound boxing bout. 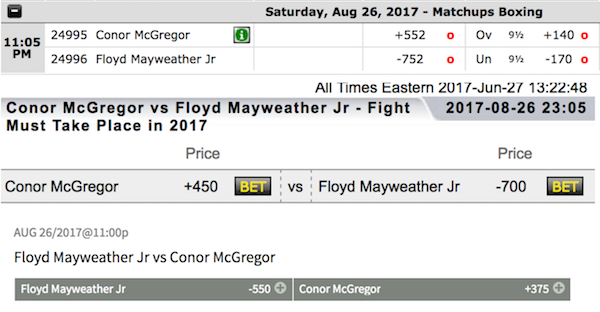 With no boxing experience — amateur or professional — under his belt, picking McGregor to beat one of the best ever to step in the squared circle is a prayer. However, in a sport where one slip up can determine the outcome, the odds McGregor enters with are at least somewhat appealing.

The obvious advantage McGregor has is age. At 28 years old, he's at the peak of his career. The same can't be said for the 40-year-old Mayweather, who is coming off a two-year retirement. In the time since Mayweather hung up his gloves, McGregor has fought four times in the octagon. Rust could hinder the favorite in this one.

Fighting at 154 pounds also benefits McGregor, who has battled as high as 170 pounds and is the reigning 155-pound UFC championship holder. Mayweather has competed as low as 130 pounds, but usually hovers around 145 pounds for fights. McGregor also holds a two-inch reach advantage over the smaller Mayweather.

It's also important to note the glove sizes. The two agreed to fight with ten-ounce gloves. MMA gloves are between four and six ounces, so the steep difference is to be seen for McGregor. Nevada statute mandates ten-ounce gloves for bouts above 147 pounds, which Mayweather is no stranger to.

Lastly, McGregor is a hell of a stand-up fighter. He's made a career out of striking, not with ground moves or choke holds. In 21 MMA wins, 18 have come via knockout — two others went the distance, while the other was a submission victory. Let's not forget about that 13-second knockout of Jose Aldo, either.

If McGregor is going to pull off an all-time upset against Mayweather, it's coming from one devastating punch. Then again, Mayweather has never been knocked to the canvass and defense is his calling card. Even at 40, Mayweather has the speed to duck and dodge the barrage of strikes McGregor throws his direction. Not only is he undefeated, but he's largely been untested — only three of his wins haven't come via knockout or unanimous decision.

Mayweather should win this one handily. There's no way McGregor can out-box him. Zero chance. Barring a miracle punch, this is an easy bet and Bovada's -550 odds gives you the best value for wagering with Mayweather. But the question is, will Mayweather score the knockout victory or his usual decision victory?

We're going with the latter. Power isn't Mayweather's forte. Nine of his last ten wins came from decision — the one outlier was a controversial knockout over Victor Ortiz, who was dropped while he had his guard down.

Sure, McGregor is a novice boxer, but Mayweather will play it easy and win via points. Mayweather knows any attempts at haymakers leave him open for that one lucky shot that can leave him on the floor.

Once again, Mayweather will stand on the winning side of history in this one.