The Chicago Bulls are back in the playoff race and will look to stay there on Wednesday night when they host the Washington Wizards at the United Center. Meanwhile, Russell Westbrook looks to lift OKC to another victory in New Orleans.

Here are a few NBA betting options to consider, with odds courtesy of Bet365.

Things looked a little dicey last week for the Chicago Bulls, who lost three straight games and dropped out of the Eastern Conference playoff race. The Bulls will look to build on a recent victory as they prepare to face the Washington Wizards on Wednesday night.

The Bulls enter action on Wednesday as -182 favorites on home court, where the club has posted an 8-5 record this season. The Wizards, who have been dreadful on the road with just two victories, are +160 underdogs.

With star guard Dwyane Wade in and out of the Bulls’ lineup, it’s been Jimmy Butler picking up much of the offensive slack. Butler is averaging 24.6 points per game, which ranks 11th overall in the NBA. Chicago continues to be the best rebounding team in the league, averaging 48 boards per game. Robin Lopez and Taj Gibson have powered the Bulls in that department as the two are averaging 7.6 and 7.3 rebounds per game, respectively.

The head-to-head matchup over the last 10 meetings has been much closer than you may think. The Wizards won six of those games over that stretch while 99.3 points per game against the Bulls.

Betting the over/under? Bet365 has set the projected points total at 208. Five of the last six meetings between the Bulls and Wizards produced over outcomes and expect that trend to continue on Wednesday with the Bulls winning on home court. 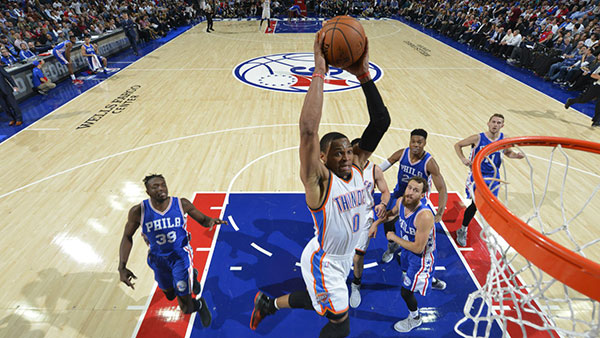 Russell Westbrook continues to be a one-man wrecking crew for the Oklahoma City Thunder, who travel to New Orleans on Wednesday night for a Western Conference duel with the Pelicans.

The Thunder — winners of six of their last 10 games — enter the matchup as -132 favorites on the road, where they’ve played below .500 basketball this season. The Pelicans are 10-20 on the season and go into their home game as +110 underdogs.

Westbrook has been OKC’s saving grace as he’s kept the Thunder in playoff contention in a ultra-competitive Western Conference. Westbrook sits first in league scoring with 30.9 points per game, followed by Pelicans star Anthony Davis at 29.6.

Westbrook hasn’t had much help offensively, as Victor Olapido is right behind him with 16.1 points per game this season. Westbrook is also the team leader in rebounds (10.5) and assists (10.9).

The Pelicans’ game plan is simple: contain Westbrook and try to eliminate his scoring opportunities. Easier said than done, especially for a club that’s allowed 106.9 points per game, which ranks near the bottom of the league.

Betting the spread? Oklahoma City is an enticing -2 favorite — a line bettors should be jumping all over while they can.

Two clubs heading in complete opposite directions will do battle on Wednesday when the Houston Rockets rolls into Phoenix to take on the struggling Suns.

The Rockets, who’ve won nine of their last 10 games, head into action on Wednesday as convincing -263 favorites on the road, where they boast an 11-5 record this season. The Suns sit second last in the conference and have just three wins in their last 10 games. They enter their match against the red-hot Rockets as +215 underdogs.

James Harden continues to put up MVP-worthy numbers in 2016, as the four-time all-star sits fifth in league scoring with 27.8 points per game and is first overall in assists (11.7). If you’re in a fantasy NBA league, Harden is one of the most valuable players to have on your roster as the guard is averaging more than 52 points a night.

The Rockets have owned the head-to-head matchup over the last 10 games, winning seven times in that span.

Bet365 has set its total points projection for Wednesday night’s match at 226.5. While it seems like a lot of points, both the Rockets and Suns are among the highest scoring teams in the league and should cover.