All odds brought to you by Bovada.

Only five active NFL players have earned regular-season MVP honors, so you can imagine how difficult it is to win this award. We’ve made it easy for you and picked the forerunners in the 2017 race. 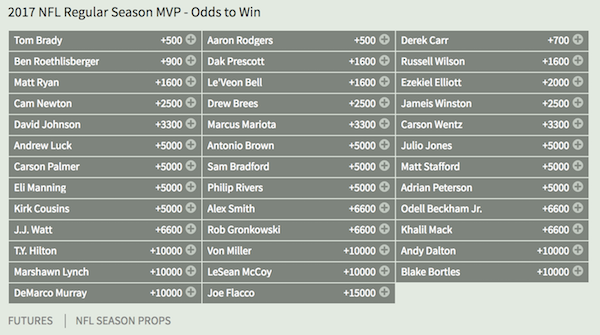 Rodgers and Tom Brady enter the season tied as the favorites to hoist the trophy. There’s something about New England that award voters snub — Brady, for all his greatness, has only won the MVP once — so Rodgers is the clear-cut frontrunner.

Here's the number-one reason why Rodgers should command your money: Martellus Bennett. The playmaking tight end was lured away from New England over the offseason and is exactly what this Green Bay team has been missing since concussions ended Jermichael Finley's career prematurely. Bennett’s can’t-miss presence in the middle of the field will open things up for the Packers' other playmakers — the newly-acquired Lance Kendricks, Randall Cobb, and Jordy Nelson.

This is as good of an offensive arsenal as Rodgers has ever had and he’ll reap the benefits in 2017. You will too if you wager with him.

Let's get this unpopular opinion out of the way: Carr isn't worthy of the $125 million contract he signed this summer, which is the richest in NFL history. He's a fine quarterback, but still miles away from "elite" status.

Here are two numbers that back our Carr is overrated theory: His 62.1 Total QBR last year ranked 16th in the league. Carr fared even worse with a pedestrian 7.03 yards per throw, which was 18th among passers. None of those numbers warrant being the highest paid player in the NFL, nor MVP winner.

Don't buy into the hype and skip Carr in this prop bet at all costs.

Prescott may have had the best rookie season in NFL history, but can he avoid a sophomore slump? It's happened to many notable quarterbacks, including Sam Bradford, Cam Newton, and Robert Griffin III in recent memory.

All pressure is on Prescott as Dallas are perennial Super Bowl contenders in the eyes of many. But unlike a year ago, Prescott isn't going to sneak up on anyone. No, the book is out on Prescott and defenses will surely adjust in year two. Expect Prescott to come back down to Earth — far away from MVP contention.

Bell has the highest chance at taking the trophy among non-quarterbacks and rightfully so considering he’s a jack-of-all-trades running back. But that’s exactly the problem. At this point, the MVP title is almost exclusively reserved for signal callers.

In the past decade, only one player that didn’t play under center has won the honor. That was Adrian Peterson in 2012, who scampered for the second-most yards in NFL history that season. If it’s going to take that much for Bell to do before earning the trophy, then forget about it.

This is a boom or bust pick. In one sense, we could see Winston tearing the league apart with new additions DeSean Jackson and first-round pick O.J. Howard. After all, the past two MVP winners have been quarterbacks out of the NFC South.

But in the same token, Winston’s inaccuracy woes hang over him like a dark cloud. He’s simply a turnover machine. Matter of fact, only Philip Rivers tossed more interceptions than Winston’s 18 last season. The MVP title rewards consistent playmaking, not erratic play, which Winston is all too familiar with.

With such steep odds, Winston is a good bang for your buck pick. But any serious investment should be avoided.