There’s no tougher NFL week to wager on than the first. With so much offseason turnover across the league, it’s tough to get a feel for most teams. We did the dirty work and found the must-bet matchup of the season opener Carolina at San Francisco.

Feature bet of the week: Carolina at San Francisco

It may surprise you that the NFL's best winning streak for week one's belongs to the lowly 49ers, who have won their last six season openers. That hot streak is in jeopardy as the Panthers, despite being on the road, are five-and-a-half-point favorites. Here's an in-depth preview of the matchup and why you should wager on it:

For starters, both begin with iffy quarterback situations for very different reasons. Journeyman Brian Hoyer will get the nod for San Francisco. It's now Hoyer's fourth team in as many seasons, which is all you need to know about his playmaking ability.

Cam Newton is more a mystery for Carolina, but more so because of his questionable health. A shoulder injury kept Newton sidelined nearly all preseason. The former MVP played just one series, where he threw only two passes.

With red flags at the game's most important position for each team, it's up to the skill players to bail one of them out. This is where the Panthers have a big advantage, thanks to Christian McCaffrey. The first-round pick has star written all over him and week 1 will be his breakout performance.

The 49ers defense was historically bad in 2016, surrendering the third-most rushing yards in NFL history. Thankfully for them, the franchise hit the reset button over the offseason with a new regime and slew of draft picks to the porous defense. That rebuild is going to take time, meaning San Francisco will be vulnerable in this game.

McCaffrey is that playmaker Newton has desperately needed. Along with Jonathan Stewart, Carolina now has a thunder-and-lightning running attack. Perhaps more exciting, McCaffrey becomes a dump-off target for Newton in shotgun situations — and with McCaffrey's speed, he's a home run threat with each touch.

The Panthers defense is on the verge of returning to their NFC-best status from two years ago. Its linebacking core of Luke Kuechly, Thomas Davis, and Shaq Thompson is already one of the best in the league.

Moreover, after an eight-year absence, franchise sack leader Julius Peppers is back and fortifies a defensive line that features Charles Johnson (second to Peppers in franchise sacks) and Kawann Short, fresh off inking a new $80-million contract. 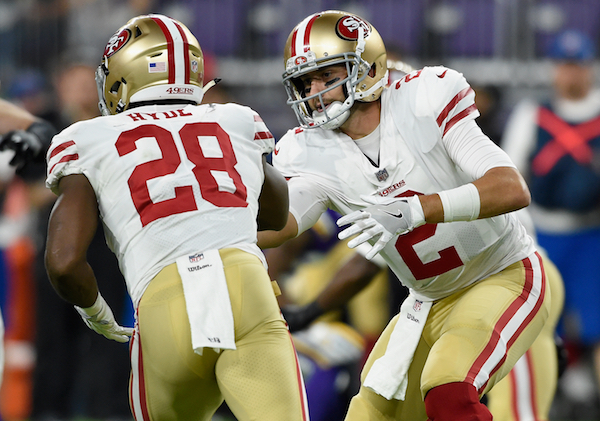 That vaunted front seven will pose problems for a 49ers team that still needs time to gel under head coach Kyle Shanahan. Sure, he play-called Atlanta to the Super Bowl last season, but there's a giant talent gap between Shanahan's new and former teams.

Points will be at a premium for San Francisco on Sunday. Their struggles will bring down this matchup's scoring total no matter how well Carolina's offense plays.

The future is bright for San Francisco, but way down the road. Carolina is the clear pick here. Behind a stud defense and the addition of McCaffrey, they're cured of that notorious Super Bowl hangover which plagued them in 2016.