The battle for the NFC North Division continues when the Lions host the Vikings in a Thanksgiving Day clash. In other action, two of the leagues best defenses will collide on Sunday when the Broncos host the Chiefs.

Here are a few NFL Week 12 betting options to consider, with odds courtesy of BetOnline. 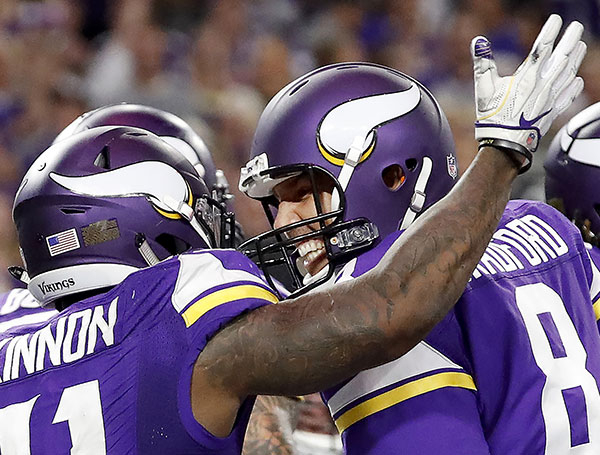 The red-hot Detroit Lions can take control of the NFC North Division when they host the Minnesota Vikings in a Thanksgiving Day clash.

The Lions have won four of their last five games and enter Thursday’s highly anticipated matchup as -139 favorites. The Vikes, who looked as if they were going to run away with the division earlier in the season, are intriguing +119 underdogs.

Many of Detroit’s wins have come in fourth-quarter comebacks. They'll need a different approach to beat the Vikings, who despite their recent struggles, still rank among the top defensive teams in the NFL. Minnesota’s stingy defense is allowing a third-best 306.9 yards per game.

Putting up points continues to be an ongoing battle for the Lions, whose 331.7 offensive yards per game ranks 25th overall in the league. Detroit’s rushing game is among the worst in the NFL and they'll have difficulty getting through the Vikings’ run defensse, which is allowing just over 100 yard per game.

Playing on Thanksgiving has become an annual tradition for the Lions, who hold a 36-38-2 overall record on the American holiday.

The head-to-head matchup has been split down the middle over the last 10 meetings, with each team winning five games. In their first encounter this season, the Lions walked away with a 22-16 victory in Minnesota.

Betting the over/under? BetOnline has set the total line at 42. Traditionally, these two teams produce low-scoring games and that will continue to be the trend on Thursday. The Vikings will pull out a close victory.

Pick: Minnesota Vikings (+119) and the Under

Fresh off a bye week, the well-rested Atlanta Falcons will look to separate themselves from other NFC South teams when they host the free-falling Arizona Cardinals on Sunday.

The Falcons went into their bye week after dropping a tight contest against the Philadelphia Eagles. Atlanta still leads the division with a 6-4 record and are -215 favorites heading into action on Sunday. The Cards, who are 2-2-1 in their last five games, are tempting +185 underdogs.

No other team in the NFL has scored more points than the Falcons, who sit third overall in total offense with 416.6 yards per game. The Falcons can thank the one-two punch of quarterback Matt Ryan and star wide receiver Julio Jones for much of their success this season. Ryan ranks second in passing, only behind New Orleans’ Drew Brees, with 3,247 yards, while Jones leads the NFL with 1,105 receiving yards.

As good as Atlanta has been, the Falcons will face a stiff test against the Cardinals, who boast the best passing defense in the league. Arizona is allowing 190.2 passing yards per game, which is sure to test Ryan.

The Falcons have owned the head-to-head series, winning seven of the last 10 meetings.

If you’re considering betting the spread, Atlanta is favored at -4 and should be able to cover at home, where they have been successful this season.

Two of the NFL’s best defensive teams will square off on Sunday Night Football when the Denver Broncos play host to the Kansas City Chiefs Sports Authority Field at Mile High.

There’s a lot more at stake in this game as both teams are chasing the Oakland Raiders for the AFC West Division crown.

With both Denver and Kansas City deadlocked at 7-3, it’s the Broncos that are -172 home-field favorites, while the Chiefs, who have won five of the last six games, are enticing +150 underdogs.

The Chiefs have the upper hand in this game as they’ve gone 2-0 against divisional opponents, while the Broncos are 1-2 versus AFC West teams.

Chiefs quarterback Alex Smith will probably feel the pressure to get the ball out of his hands a lot sooner when Broncos linebacker Von Miller is on the field. Miller is among the league leaders with 9.5 sacks this season and he’s sure to add to that stat on Sunday night.

Denver has dominated the head-to-head series over the last 10 games, winning eight of those matches.

Don’t expect the low-scoring teams to go over BetOnline’s total points line of 39.5 either. Both the Broncos and Chiefs have averaged just over 20 points per game, but this should be a defensive battle from the opening whistle.