It’s been a rollercoaster 2016 NFL regular season. With the final week upon us, here’s three sure-fire picks to finish the ride on top.

Aside from seeding, the playoff picture is mostly set across the NFL, sans this matchup. With both teams tied atop the NFC North with 9-6 record, the division championship is on the line — and the loser could miss the playoffs if the Redskins win, too.

The stakes don't get any higher than this. Who do you want at quarterback, Aaron Rodgers or Matt Stafford? There's no team in the NFL hotter than the Packers, winners of five straight, and Rodgers is playing at an MVP level.

Here's where Rodgers numbers rank this season: 4,128 passing yards (4th), 36 touchdowns (1st), and quarterback rating of 102.7 (5th). During the Cheesehead's hot streak, Rodgers has tossed for 11 scores and zero interceptions.

For the Lions, Stafford has played his best when the game is on the line, evident by his NFL-record eight fourth-quarter comeback wins this year. But he trails Rodgers in the aforementioned categories with 3,980 passing yards, 22 touchdowns, and 93.1 quarterback rating.

The tale of the tape between the two signal callers shows a gulf-size difference in favor or Rodgers. Moreover, Green Bay just seems to have Detroit's number, hence why they've won the division four of the past five years. On Sunday, they'll make it five times in six seasons. 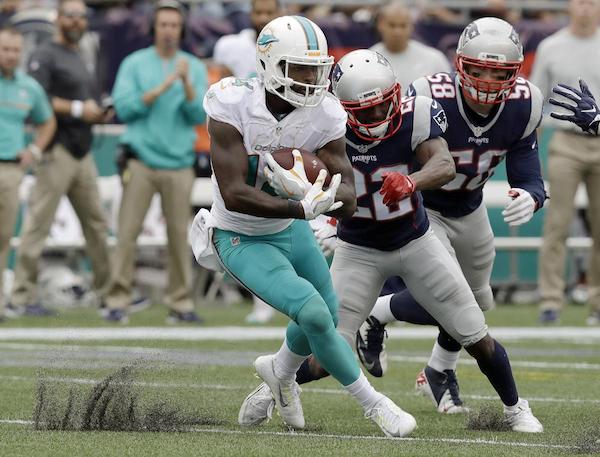 The total here is a little underwhelming for two teams that have lit up the scoreboard in recent weeks. On one hand, you have the Dolphins who have hit the over five times in a row, scoring at least 26 points in four of those games.

Then there's the Patriots, who just hung 41 points last week and are averaging 27.1 points per the season. So what gives?

Both head coaches, Bill Belichick and Adam Gase, already shot down the notion of resting players in spite of having spots clinched. Why would they, when plenty remains at stake? A win by New England would clinch home-field advantage through the playoffs and Miami could still move up the AFC's fifth seed.

While the Dolphins have won nine of the past 10, there's a glaring hole on their team — run defense. Opposing runners have gashed Miami to the tune of 141.8 yards per matchup, which ranks 30th worst in the NFL. Last Saturday, the Bills set a franchise record for yards from scrimmage, 589, against this Dolphins unit.

That's a weakness that Belichick will exploit all Sunday long with one of the NFL's premier runners LeGarrette Blount. He's already set a career-high in rushing yards with 1,110. Blount will run wild and this matchup will hit the over.

If not for an unbelievable play by Antonio Brown with seconds remaining in the game, Baltimore (8-7) would be playing for the playoffs this week. Yet, they're underdogs against a weak Bengals (5-9-1) team.

While they struggled to stop Ben Roethlisberger last week, the Baltimore defense is among the league's best. Giving up 19.6 points game, the Ravens defense is the NFL's stingiest and one of only two defensive units that are giving up less than 20 per contest. And Cincinnati's Andy Dalton is a far cry from Big Ben.

Dalton has had an underwhelming 2016 campaign as he'll miss the playoffs for the first time in his six-year career, plus he's fresh off a loss to Houston where the Bengals barely put up 10 points. The Ravens should feast, despite being on the road.