The Tampa Bay Lightning saw their five-game winning streak end in Game 2 at Pittsburgh, but they still managed to grab the home-ice advantage as the Eastern Conference final switches to Amalie Arena tied 1-1. 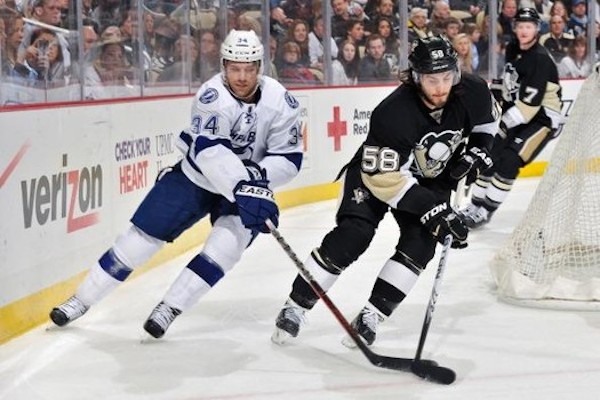 Ending an eight-game goalless drought with the Game 2 winner and the first Stanley Cup overtime goal of his career, Penguins captain Sidney Crosby is off the snide and that can't be good news for the Tampa Bay Lightning. Scoring at the 40-second mark, it was also the quickest OT winner in Penguins playoff history, suprassing the mark of 47 seconds set by George Ferguson in 1979. And it was Crosby's 47th playoff goal, moving him into third on Pittsburgh's all-time list.

Perhaps now that he owns the last change and control of the matchups, Lightning coach Jon Cooper can get his slumbering top line back to work. Tyler Johnson (4-9-13) and Nikita Kucherov (9-3-12), Tampa Bay's two leading playoff scorers, are without a point in the series and a combined minus-one. Cooper wants more puck possession and shots than the 41 they generated in the two games at Pittsburgh.

Anticipate the same goaltending matchup as in Game 2. Cooper indicated that Ben Bishop, who suffered a lower-body injury in Game 1, is close to being ready but planned on sticking with Andrei Vasilevskiy between the pipes for Game 3 after he made 38 stops in Game 2. Matt Murray goes for the Penguins.

Seeing his first action in 19 games since suffering a fractured fibula March 26, Lightning defenseman Anton Stralman opened the scoring for them in Game 2, giving him five goals in four games this season against Pittsburgh, but he also made a couple of ill-advised pinches that led to Penguins goals, including Crosby's OT winner. Gritty Tampa Bay forward Ryan Callahan missed Game 2 due to the flu and is listed as questionable for Game 3.

The Penguins snapped Tampa Bay's five-game winning streak and the Lightning's six-game road playoff winning streak. The Penguins also tied a franchise mark with their third OT win of the postseason, something Pittsburgh also accomplished in 2001 and 2009. It was also the Penguins' first win against the Lightning since Jan. 2, 2015 and ended a five-game playoff losing skid against Tampa Bay that extended back to Game 4 of the 2011 Eastern Conference quarter-final between the two teams.

Pittsburgh coach Mike SUllivan benched Connor Sheary, who'd played much of the playoffs on Crosby's wing, for the third period and overtime of Game 3 and it was Bryan Rust, who replaced Sheary on the top line, that set up Crosby's winner.