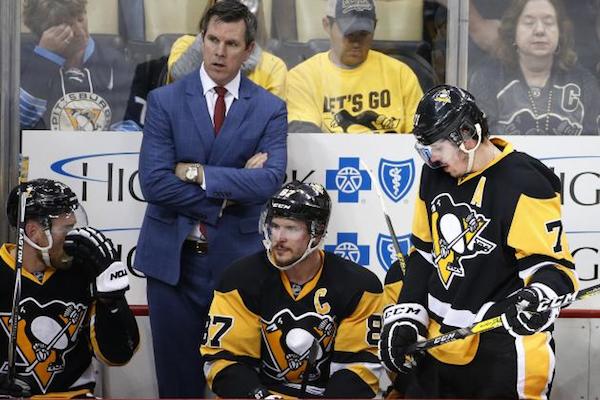 If you are Pittsburgh Penguins coach Mike Sullivan, you awoke this morning to a plethora of concerns. Does he go back to rookie goals Matt Murray, who was pulled after the Tampa Bay Lightning opened a 4-0 lead in Game 4, or does he roll with veteran and 2008-09 Stanley Cup winner Marc-Andre Fleury, who played a shutout third period as the Penguns nearly rallied for victory in their 4-3 loss? Sullivan indicated he won't make that call until game time.

The Lightning, who altered their gameplan to be more aggressive on the forecheck in Game 4, also were quiet on who would be in goal for them. Ben Bishop (lower-body injury) hasn't played since giving way to Andrei Vasilveskiy in Game 1, but has been practicing for a few days now.

Pttsburgh also lost defenseman Trevor Daley to an undisclosed injury, what some believe may be an ankle issue, and that forced Kris Letang to play a game-high 31:38 in Game 4. Daley's status for Game 5 is uncertain. If he can't go, either Olli Maatta, a healthy scratch since Game 1 of this series, or Derrick Pouliot would be inserted into the lineup.

The Penguins have not dropped back-to-back games in 53 games, a streak that stretches back to Jan. 12-15, but the team that beat the Penguins on Jan. 15 was the Lightning. Winning Game 5 could prove vital to the outcome of this set. In Stanley Cup history, when series are deadlocked 2-2, Game 5 victors go on to capture 78.2 per cent of those series (290-81).

Forced to play with a full facemask to protect injuries suffered when struck in the face by a puck during the Game 4 warmup, Lightning forward Tyler Johnson netted the eventual game winner, the sixth of his Stanley Cup career. The Lightning are 11-1 when Johnson scores a goal in these playoffs. Tampa Bay forwards Nikita Kucherov (plus-14), Johnson (plus-13) and Alex Killorn (plus-10) are 1-2-3 in the playoffs in plus/minus.