The NHL’s best road team during the regular season, the San Jose Sharks have lost four straight road playoff games heading into Game 2 of the Western Conference final Tuesday in St. Louis against the Blues. 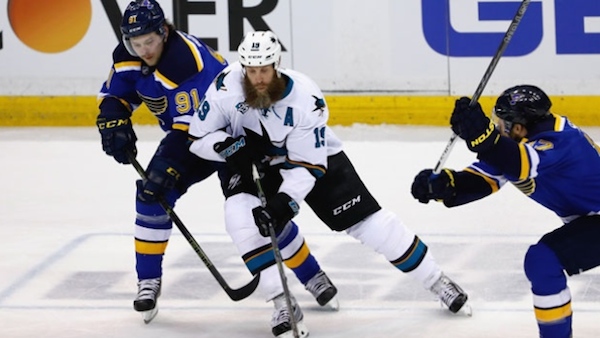 Both the Blues and Sharks opted to stay off the ice Monday on the off-day between Games 1 and 2. That left speculation on any changes the teams might opt to implement a complete guessing game, though there is a belief that Sharks coach Peter DeBoer may drop Patrick Marleau back to this third-line center role in order to give his forward lines more balance against the deep group of St. Louis forwards.

Sharks forward Matt Nieto, out the past two games with an undisclosed injury, remains listed as day to day and while he's expected to play at some point in this series, Game 2 seems unlikely. The NHL's best road team during the regular season with 28 wins, San Jose has lost four in a row on the road in the playoffs after starting postseason play with three successive road victories at the Staples Center in the opening round against the Los Angeles Kings.

Since his only shaky outing of the playoffs in Game 6 of the second round against the Dallas Stars, Blues goalie Brian Elliott has returned to the netminder who led the NHL in save percentage (.930) and was second in goals-against average (2.07) during the regular season, making 32 saves in their 2-1 Game 1 victory. Elliott improved to 4-0 against the Sharks in the playoffs with a 1.29 GAA and .954 save percentage.

Blues captain David Backes scored a goal and dished out 11 hits in Game 1, three fewer than accounted for by the entire Sharks team. With 7-6-13 numbers in 15 games this playoff, Backes has matched his output (5-8-13) from his first 29 career playoff contests.

Jori Lehtera's game winner in Game 1 was just the second career Stanley Cup goal for the Blues forward and only his second goal in his last 27 games. The Blues won Game 1 against the Sharks for the first time in five playoff meetings between the teams. Clubs winning Game 1 of a conference final series own a .698 all-time winning percentage (67-29). The Sharks are 4-11 in series in which they've lost Game 1 and are 0-5 in series following a set that they required seven games to win.