Poland is still awaiting for their striker Robert Lewandowski to come to life at Euro 2016. The Bayern Munich star will get another chance on Saturday when Poland faces Switzerland in the round of 16.

Even without star striker Robert Lewandowski performing at his full potential, Poland reached the round of 16 at a European Championship for the first time in the country’s history. They’ll have their work cut out for them in the knockout stage, as the Group C runners up on Saturday will face Switzerland, which finished second in Group A.

Lewandowski, arguably one of the top three strikers in the world, has yet to find the back of the net in the tournament — a rare occurrence considering the 27-year-old Bayern Munich star has 34 goals in 79 matches. In fact, Lewandowski has yet to even have a shot on target.

Someway, somehow, Lewandowski will need to shake out of this slump if they stand any chance against a defensive-minded Swiss team looking to make a run of their own.

Polish goalkeeper Lukasz Fabianski is not concerned about the star striker and believes his side has what it takes to “get even better.”

“We’ve reached the next round of a major tournament for the first time in 30 years. It’s reason to celebrate,” Fabianski told uefa.com. “On the other hand, I know it can get better.”

Poland secured its berth to the knockout stage with a 1-0 victory over Ukraine, while Switzerland advanced after gaining a point from a scoreless draw with tournament hosts France.

Poland is one of just two teams in the tournament that have yet to concede a goal — the other being Germany.

Bovada has a +105 line that Poland will win in regulation and are pegged at +750 to take the victory in extra time — a likely scenario as both countries have been involved in tight matches throughout the tournament.

According to the online sportsbook, Switzerland is set at +170 to win in regulation time. Poland is also favored to win the match by a one-goal margin at +275 according to Bet365.com’s line. 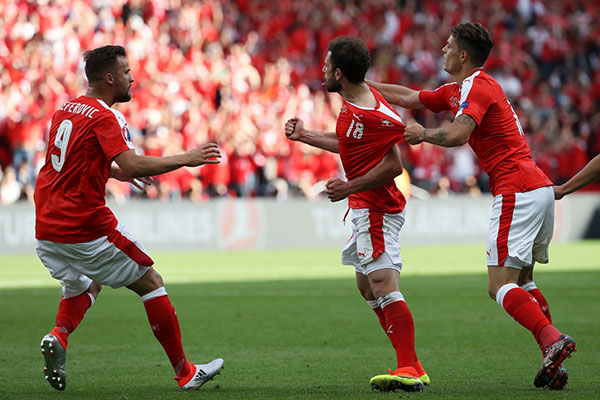 Switzerland has had its share of struggles against Poland, having only won just one time in 10 previous meetings between the two countries.

Admir Mehmedi and Fabian Schar scored Switzerland lone two goals of the tournament and the team is still waiting for their star players to make an impact. Forward Haris Seferovic has five attempts on target but has yet to find the back of the net.

This match will go right down to the wire and may even require penalty kicks to decide a winner. However, Poland’s offense will be enough to get them through.