After wins for Southampton, Swansea and Wolves at Liverpool's home ground, followed by last weekend's defeat at Hull, Jurgen Klopp's men are going through an extended rough patch. Can they prevail against one of the most dangerous teams in the league?

The fixture earlier in the season showed that matches with Tottenham and Liverpool are always nip-and-tuck battles.

Saturday's game will be a tight affair, and the tie looks the best bet at +235.

Arsenal have endured a torrid fortnight, beaten by both Chelsea and Watford on Premier League duty, all but ending their title chances. Hull City are not the mugs some take them for, and both sides to get goals and there to be over 2.5 is +135 and well worth taking.

While United are the favorites, Watford are +110 with a +1.5 goals handicap. The Hornets are buzzing right now (sorry) after beating Arsenal and may only be edged out if they are at all.

David Moyes' men destroyed Crystal Palace and are huge odds to win by the most common scoreline in Premier League history, 2-1 to the home side. The Mackems are an unmissable +1200.

Tony Pulis has West Brom performing at a high level and although his side are good odds to win, they are better staked without the tie, at a very reasonable +140, via Bovada (below). 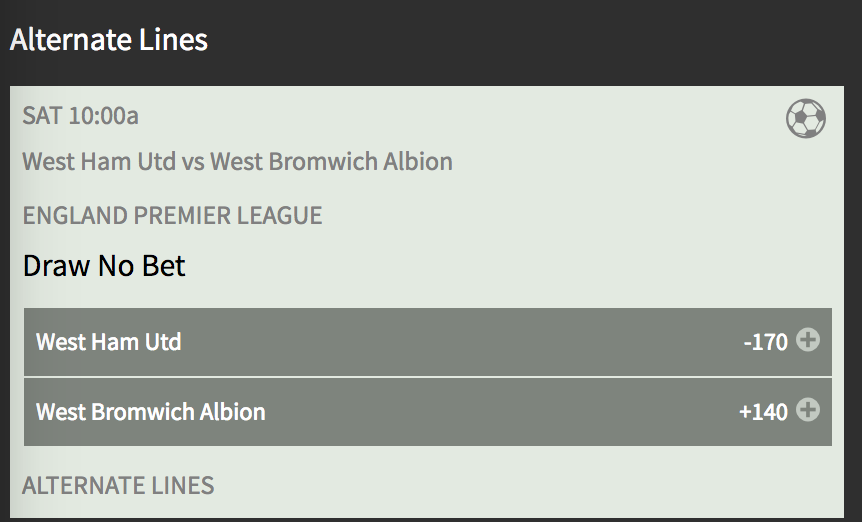 Last week's action saw Peter Crouch score his 100th goal in the Premier League, at the age of 35. But the next in line to reach that landmark who is currently playing in the league is over a decade younger than the former Portsmouth and Spurs man. Who is it?

Back to the game at hand, and Crystal Palace need some points. We're not sure that they will find the Britannia the place to do so, however. Stoke must be backed at Evens against a side who lost 0-4 to Sunderland last weekend.

Chelsea are value even with a -1.5 goal handicap at +115. Burnley have a history of rolling over in this fixture.

An easy home win for a resurgent Swansea at +140.

Bournemouth have been shipping goals and The Citizens will fill their boots. Manchester City to score 3 or more is +130.