Two teams who’ve known their fair share of playoff frustration clash for the right to move on to the Stanley Cup final. The St. Louis Blues haven’t advanced to the Cup final since 1970, while the San Jose Sharks have never played in the final. 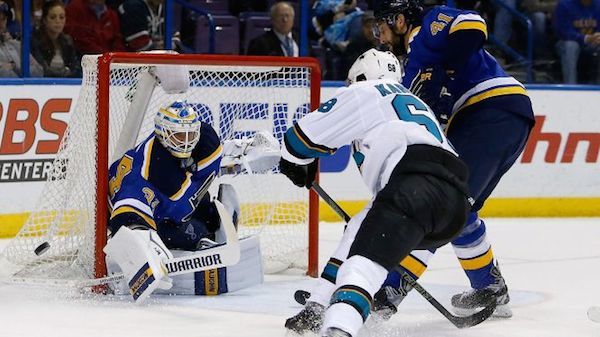 The last time the Blues reached the Stanley Cup final, NHL coaching legend Scotty Bowman was behind their bench and Glenn Hall and Jacques Plante gave them a 1-2 punch of Hall of Fame netminders. The Blues have never won a Cup final game - going 0-12 in three series - but at least they've been there. The Sharks haven't, going 0-4 in previous Western Conference final appearances. It's San Jose's third conference final appearance since 2010.

Blues coach Ken Hitchcock looks like he's going back to the STL unit as his top forward line, reuniting Jaden Schwartz, Vladimir Tarasenko and Jori Lehtera in practice Saturday, while Alex Steen was back with David Backes and Patrik Berglund. Berglund has goals in his last two games, and Backes is riding a three-game assist streak.

Hitchcock (1998-99 Dallas Stars) is the only one of the four head coaches remaining in the playoffs who's guided a team to a Stanley Cup title. San Jose's Peter DeBoer got to the Cup final with the 2011-12 New Jersey Devils, but lost in six games to the Los Angeles Kings.

DeBoer indicated that forward Matt Nieto (undisclosed injury) who missed Game 7 of the second round against the Nashville Predators, is unlikely to play Game 1 against the Blues and is listed as day to day. Forward Joel Ward was given a maintenance day Saturday but DeBoer said Ward would be in their Game 1 lineup. Sharks defenseman Marc-Eduoard Vlasic has 0-6-6 numbers during a five-game points streak. Forwards Logan Couture and Joe Thornton are riding four-game point scoring streaks.

The Blues are third in the playoffs on the power play (27.5 per cent) but just 10th-best at home (18.2 per cent). Both the Blues (4-0) and Sharks (5-0) are unbeaten when leading after two periods of play. Troy Brouwer netted four goals for the Blues in the second round after scoring once in the the opening round.

Four of the last five times the Blues have opened a playoff series at home Game 1 has gone to overtime, with St. Louis winning three of the four OT tilts. Blues goalie Brian Elliott is 4-0 vs. the Sharks in the postseason, including a 1.37 goals-against average and a .949 save percentage.