Techniques to win your NBA bets

The Pistons trying to stay in the Eastern Conference playoff mix host the struggling Pacers at the Palace of Auburn Hills on Saturday. In other action, look for the red-hot Houston Rockets to continue their winning streak when they make a stop in Minnesota to face the Timberwolves.

Wagers to make on Saturday

Here are a few NBA betting options to keep in mind, with odds courtesy of Bet365.com.

It’s only mid-December but the playoff race in the Eastern Conference is already heating up. Two of the clubs trying to stay in that race will clash on Saturday night when the Detroit Pistons host the Indiana Pacers at the Palace of Auburn Hills.

The Pistons, who’ve won six of their last 10 games, enter the highly anticipated matchup as -175 favorites on home court, where the club has posted an 8-4 record this season. The Pacers — losers of back-to-back games — are +155 underdogs.

The Pistons on average are allowing 96.6 points per game, which is the second fewest in the NBA. Only the Utah Jazz have allowed fewer points this season. Detroit is also one of the best rebounding teams in the league, led by big man Andre Drummond, who’s 13.7 boards per game ranks second overall behind Miami’s Hassan Whiteside.

However the Pistons’ stingy defense will be tested on Saturday night against a Pacers team averaging a 14th-best 104.2 points this season.

Indiana has owned the head-to-head matchup over the last 10 games, defeating the Pistons seven times during that span.

If you’re considering putting a wager on Bet365’s 200.5 total points projection, keep in mind four of the last six meetings between these two clubs have produced over outcomes.

The Houston Rockets have been knocking down any opponents standing in their way. Their next victim could be the lowly Minnesota Timberwolves on Saturday night when the two Western Conference clubs clash at the Target Center.

Winners of nine in a row, the Rockets enter Saturday night’s contest as convincing -182 favorites on the road, where they hold a 10-5 record. The Timberwolves haven’t had much to cheer about this season as the club sits second last in the West with a 7-18 overall record.

The Rockets can thank MVP candidate James Harden for their recent success as the star guard ranks sixth in league scoring with 27.7 points per game. Harden is a master at creating offense and leads the NBA in assists per game with 11.8.

The head-to-head history between these clubs over the last 10 meetings has been one-sided to say the least. Houston has won nine games over that stretch and haven’t dropped a match against the Wolves since April 2014.

The total projection for Saturday’s match is high at 220, but keep in mind the last nine games between the Rockets and Wolves have produced over results. 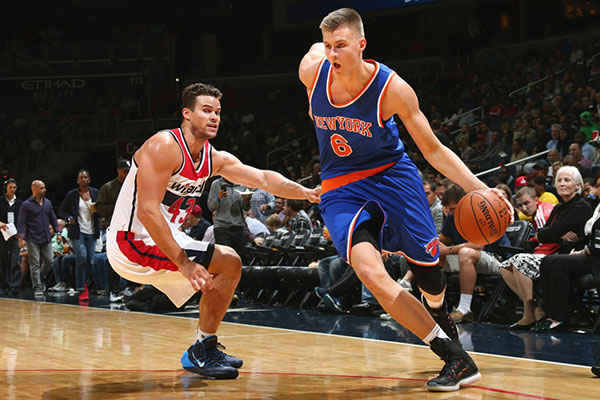 The New York Knicks can move into sole position of third place in the Eastern Conference with a road victory on Saturday against the Denver Nuggets at the Pepsi Center.

The Nuggets have won two of their last three and enter Saturday’s match as -175 favorites on home court. The Knicks, who are coming off back-to-back defeats, can leapfrog the Boston Celtics for third in the conference. New York enters the match as intriguing +155 underdogs on the road, where they’ve struggled considerably this season.

The Knicks have improved greatly defensively and rank second overall in rebounding this season thanks to the dynamic duo of Joakim Noah and Kristaps Porzingis, who are averaging 7.9 and 7.7 boards per game, respectively.

All-star guard Carmelo Anthony, who is returning from a shoulder injury, called Saturday’s game against his former club a “must win” situation for the Knicks. Anthony has been spectacular offensively this season, leading the club in scoring with 22 points per game.

The head-to-head history over the last 10 meetings between the Knicks and Nuggets has been a lot closer than you may think, with Denver winning six times over that period.

Take the under on Bet365’s total points projection of 215.5. The Knicks and Nuggets have battled to six straight under outcomes.