The Montreal Canadiens are fantastic on home ice, where theyve only lost one time this season. Theyll look to keep rolling at the Bell Centre against the visiting Colorado Avalanche on Saturday night.

Here are a few NHL betting options to consider, with odds courtesy of Bet365.

Playing on home ice has translated to automatic two points this season for the Montreal Canadiens, who will play host to the Colorado Avalanche on Saturday night at the Bell Centre.

The Canadiens are averaging 2.96 goals for per game and thanks to all-star goaltender Carey Price, the club is only allowing 2.22 tallies. Price tops all NHL goaltenders in wins with 15 and has posted a 1.83 goals against average, which is puts the Vezina Trophy winner fifth in the league.

It may be an easy night for Price as the Avs have only netted 56 goals — second fewest in the NHL this season.

As cross-conference rivals, these two clubs don’t face off against each other too often. However, the Avs hold a 6-4-0 record against the Habs over the last 10 games dating back to the 2009 season.

The over/under total goals line has been set at 5, but don’t expect this to be a high-scoring contest, especially with Price in net.

Pick: Montreal Canadiens (-213) and the Under 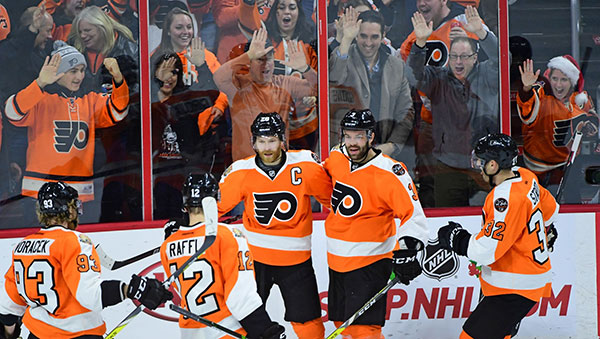 The Flyers have been surging up the Eastern Conference standings and will be looking for an eighth consecutive victory on Saturday when they host the Dallas Stars at Wells Fargo Center.

It feels like an eternity since the Flyers actually last lost a game — a 3-2 defeat against the New York Rangers. Philly enters action on Saturday as -147 favorites on home ice, where they’re 10-5-2 this season. The Stars — winners of just three of their last seven games — are +125 underdogs.

Flyers right winger Jakub Voracek has been on fire of late as he is riding a three-game point streak. Giroux has points in six of the last seven games to sit tied for fourth in NHL scoring this season.

While the Flyers are one of the best teams offensively, they’ve struggled to keep pucks out of their own net. Philly is allowing on average 3.10 goals per game — third most in the NHL. The Stars rank dead last in that department, having allowed a staggering 3.18 goals per game.

The Flyers are 6-4-0 against the Stars over the last 10 meetings.

This match has the makings of a high-scoring affair, so be sure to take the over on Bet365’s 5.5 total goals line.

It took a while for the Calgary Flames to get rolling, but following a five-game winning streak, the club finds itself third in the Pacific Division standings. The Flames will seek a sixth straight victory when they host the visiting Winnipeg Jets on Saturday night at Scotiabank Saddledome.

The Flames — winners of seven of the last nine — enter Saturday’s contest as -135 favorites, while the Jets, who are trying to snap a two-game losing skid, are enticing +115 underdogs.

Calgary’s record on home ice has been average at best as the Flames hold a 6-7-0 record at Scotiabank Place. The club’s offense was ignited by the return of Johnny Gaudreau, who had been sidelined with a hand injury. Since coming back, Johnny Hockey has six points in the last three games.

The Jets know a thing or two about scoring goals too — especially with rookie sensation Patrik Laine on the ice. Laine’s 17 goals ranks second among all NHL players — behind Sidney Crosby and David Pastrnak.

Over the last 10 games between these two clubs, the Flames have defeated the Jets six times.