It hasn’t been Cristiano Ronaldo’s tournament as the striker has yet to make a real impact at Euro 2016. The star striker will get a final chance when Portugal wraps up group play with a game against Hungary on Wednesday.

Despite some unlucky moments so far, Portugal remains within striking distance of clinching a spot to the round of 16 at the European Championships. With two straight draws, a victory over Group F leader Hungary on Wednesday would surely lift Cristiano Ronaldo and the Portuguese side to the knockout stage.

Luck was certainly not on Ronaldo’s side during the team’s match against Austria, when the superstar striker hit the post on a penalty kick and later had a goal called back for being offside.

“We did more than enough to win the match and we didn’t win, so that’s why we are a little bit more worried,” veteran defender Ricardo Carvalho told goal.com. “Now we are going to think about that match (against Hungary).”

Bovada has a line of +245 for Portugal to escape the match with a one-goal victory. The online sportsbook also has Portugal at -120 to post a clean sheet en route to advancing to the round of 16.

Ronaldo is also the favorite to net Portugal’s first goal with a +130 line set by Bet365.com.

It’s win-or-go-home for the Portuguese side. Ronaldo and Co. will be determined for the three points and will win a hard-fought battle in doing so.

Are you an Iceland believer yet? The European Championship newcomers have certainly turned some heads and now have the opportunity to secure a spot in the round of 16 when they face Austria in their final Group F match on Wednesday.

Iceland opened the tournament with two straight draws and now have a realistic chance of defeating Austria, which have one point and need a victory to have a shot at the knockout stage.

Despite what the standings show, Austria remain favored in this match as Bovada has a line +270 line that the side will come out with a one-goal victory.

This game will be tight and may come down to the wire to determine a winner. Bet365.com has a -120 line that a late goal will be scored after the 71-minute mark. Marc Janko is Austria’s best chance of getting on the scoreboard first as the sportsbook has the striker at +240 to net the team’s opening goal.

Bet365.com pegs Iceland’s Gylfi Sigurdsson at +300 to accomplish the same feat for his club.

This should come down to the wire with Austria pulling out a close victory.

An undermanned Italian team can wrap up Group E action with a perfect record when the Azzurri face Ireland on Wednesday.

Coming off two straight victories, Italy leads the group with six points — something soccer critics around the world did not expect as the Azzurri entered the tournament with key injuries to Claudio Marchisio and Riccardo Montolivo.

However, Antonio Conte’s side has been resilient in silencing those critics as other players have stepped up to fill the void.

“We know it will be difficult. Italy have been fantastic in their first two games,” Irish captain John O’Shea told hitc.com. “With a bit more discipline and control, I think can get something from Italy.”

Bovada has a +290 line Italy will wrap up group play with a one-goal victory over Ireland. Gianluigi Buffon has been spectacular in two matches and has not allowed a goal so far. The online sportsbook has a +240 line the Italians will once again record a clean sheet.

Graziano Pelle is favored to score Italy’s first goal at +300, according to the Bet365.com line. At the other side, Shane Long is a +300 favorite to net Ireland’s opening goal.

The Italians will continue to roll and will finish group play on a high note.

The Belgians rebounded after an opening defeat and will be looking to cement its place in the final 16 when they face Sweden in their final Group E match on Wednesday.

After an opening loss to Italy, the Belgians showed why they’re the second best team in the world when they defeated Ireland 3-0.

Romelu Lukaku carried Belgium to the victory with a pair of goals and the striker will be looking for the same success against a struggling Sweden team. 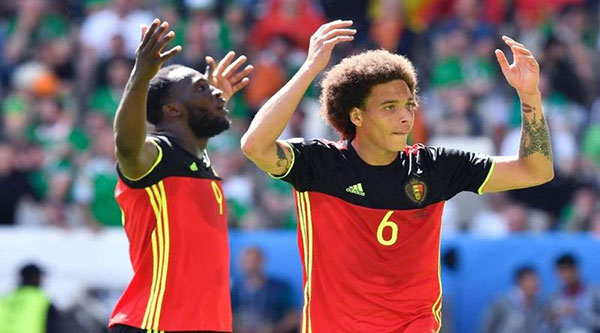 Bet365.com has a +220 line set that Lukaku will score Belgium’s first goal of the match. Lukaku has 14 goals in 46 international matches.

The Belgians, however, must be wary of Swedish striker Zlatan Ibrahimovic, who has yet to score a goal in the tournament but is a threat to any opposing team.

“They have got a great player up front, Zlatan,” Belgian manager Marc Wilmots told eurosport.com.

The online sportsbook has Ibrahimovic at +225 to score Sweden’s first goal of the match.

Bovada has a +260 line that Belgium will walk away with a one-goal victory — a realistic outcome as the Belgians will be looking to secure a spot in the knockout stage.

The second Grand Slam of the year is well underway at Roland-Garros in Paris. So if you’re going to drop French Open bets, now is the time to do it. Read this to get our best picks to win the 2022 French titles — both on the men’s and women’s singles bracket! Betting Pick To […]