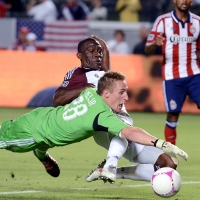 In recent years, Major League Soccer (MLS) has turned a corner. The league will swell to 30 teams by 2023. Arenas are either being built from the ground-up or being filled to full capacity — Atlanta, we're looking at you. And more star players have flocked to the league, whether to play or to own a team themselves (David Beckham). Gambling interest has followed suit and there is now an array of MLS betting sites.

The future is indeed bright for the MLS. That's why it's becoming a sport that needs to be part of every bettor's repertoire cause there's money to be made. Lots of money, actually.

We've created this betting guide for the modern-day MLS bettor in mind. What sportsbooks to use, the latest MLS odds, tips for the league — we'll be covering each of those all-too-important topics throughout this article!

The next match will be displayed here once announced.

Most MLS games are contested on Saturday and Sunday, though, inter-week games are not uncommon. If you're looking for the latest MLS betting odds, check them out at the table below. We update these MLS Vegas odds in real-time — all the way to the opening whistle.

Since we're speaking about MLS betting lines, picking an online sportsbook is an ever-important decision and a hard one at that. You see, there are hundreds of online bookies that take wagers on sports. Some good, some bad.

With your best interest in mind, we've compiled the best of the best for soccer betting, and MLS betting specifically. There are some bookmakers that excel in its wagering selection, while others are better for racking up bonuses and rewards.

Every bettor wants something different out of a bookie, that's why we're giving you four different options that could serve you well whilst gambling on the MLS. Our top-value sportsbook suggestions are as follows:

When it comes to its sportsbook menu, few North American sportsbooks can outdo Bovada. The platform has betting lines for every sport and league imaginable.

Of course, the MLS in a prominent fixture within Bovada's catalog. Every single MLS match has odds available on-site in some capacity. Sure, you'll get moneylines and over/under goal totals, but there are also props like next team to score or MLB expansion odds.

Bovada earns a lot of brownie points, not only from us, but gamblers far and wide. Since its founding in 2011, its become one of the most-used offshore betting sites in the United States. That should tell you plenty about its quality.

A welcome bonus can be found on most online sportsbooks. More or less, they work in the same manner: sign up, make an initial deposit, and earn free play in return. However, it's the last part that varies from bookie to bookie.

Without question, BetOnline has one of the most lucrative free-play bonuses available today. When maxed out, it can reach as much as $1000. BetOnline will match whatever first deposit you make by 50 percent. Therefore, to earn that full grand prize, you'll need to insert at least $2000 (though, it could be more or less if you please).

A $1000 bonus would go a long — and we mean long — way when wagering on the MLS. Play your cards right and you could realistically parlay that into even bigger winnings.

In-play betting continues to surge in popularity and there's seemingly no end in sight. For those unfamiliar, live betting allows you to bet on a soccer match while it's ongoing — anytime, anywhere.

One of the best systems for live wagering across the marketplace is MyBookie. For one, it carries the capability on a slew of games, including MLS lines. Two, the site updates in lines quickly and efficiently, the way it's supposed to be done.

Live betting is a great way to get a feel for an MLS game. You just have no way of knowing if a club will come out sluggish or receive a game-changing red card early on. With in-play, you negate those risks by waiting 'til the game has started to bet.

If you're serious about gambling on the MLS, you'll be making a lot of wagers over the course of a season. Knowing this, it would benefit you to join a sportsbook with a rewards program.

This is where BetDSI comes into play. At BetDSI, you earn BetPoints with every single wager, whether it's on the MLS or any other sport. These BetPoints can rank you through three rewards levels — Gold, Platinum, and Diamond — that come with their own unique perks.

The best perk, though? The ability to exchange BetPoints for cash, which is redeemed to your account instantly. At BetDSI, you'll really get paid to bet on MLS over the long run.

That rounds out our list of recommendations. Any one of the four would be a great bookie during the MLS campaign.

What Are The MLS Standings Today

The MLS differs a lot from its soccer league counterparts in Europe — the English Premier League, La Liga, Series A, and others. None of those European leagues have a playoff system, just a regular season and whoever finishes atop the table at years-end is crowned league champion.

Whereas the MLS runs its regular season from March through October, each team playing 34 games apiece. Fourteen teams advance to the playoffs, which is played in single-elimination format until an MLS Cup champion is decided in November.

Follow all the madness in the table below. No need to go to MLS online com because we update these standings in real-time. For newbies, a win earns an MLS team three points in the table, while a tie is worth one. The +/- indicates goal differential (GF - GA) and serves as a tiebreaker in case the standings are dead-even.

If you end up mastering our MLS betting tips, you'll end up being rewarded handsomely. With a season that stretches from March until November, MLS is one of the lengthiest in all American sports.

Of course, mastering it is easier than done. The sport is wildly unpredictable and no one really knows what'll happen once on the pitch.

Nonetheless, we wanted to share some pieces of wisdom. It's something we've learned from observing the MLS from afar and it might be an assist to you.

MLS Playoffs Are A Crapshoot

In 2019, the MLS switched its playoff format to include 14 teams and move away from a home-and-away, aggregate-goal structure. Now, every single postseason match is win-or-go-home style, which only creates more chaos while wagering.

Here's a wild, but true fact: only twice between 2010 and 2019 did the team that finished with the best regular-season record (who is awarded the Supporters' Shield trophy) go on to win the MLS title. Just twice! That's a far contrast from the NFL or NBA, where top seeds typically win out.

Therefore, once the MLS Cup odds are out, don't automatically side with the team with the better regular-season record. Instead, look for the team that ended on a high note and is streaking hot going into the postseason.

Being Too Good For The Draw

Soccer adds an entirely new element to moneyline betting — the draw. MLS soccer odds will include this outcome when wagering on three-way moneylines or double-chance bets.

Still, American-based bettors, by and large, hate draws. Merely allowing a game to finish tied is a common complaint naysayers will hurl at the entire sport. While we'd love a winner and loser in every match, you can't overlook the draw when betting.

For better or worse, a lot of soccer matchups end tied. Heck, an overmatched team might even build their entire gameplan around preserving a nil-ni draw.

While its human nature to put teams into binary categories — e.g. this team is better and the other is worse. Just know, the best teams don't always win despite their superior talent on the pitch. While it'll never be "sexy" to bet on the draw, many times, it is the smart money.

All too often, we see bettors make too many bets on the MLS. Yes, that's a thing.

Hear us out: betting isn't about throwing money at every single wagering line. No, it's about finding value. And at times, it takes patience to find a bet that a bookie possibly under- or over-valued.

That's why we advise to be extremely selective with your MLS bets. We know what you're thinking, "but if I bet less that means I'll also win less times." Not exactly.

The key is to find one or two bets that you absolutely love. Once you've found one, up the risk amount significantly on it. A win and you'll earn as much as you would if you hit on a multitude of small wagers. So in other words, "go big or go home."

Welp, that does it for our MLS betting tips. We hope this has been of value to you. Now it's time to heed our advice and start your MLS betting journey. Check out one of the sportsbooks below to get started: