A Look Back At The MLS

Twenty-nine goals were scored during Week 13 of the 2016 Major League Soccer season, and we are telling you about them all, including a seven goal thriller in Ohio.

New York Red Bulls had to play all of the second half of their match against Toronto F.C. with 10-men, but they were already 3-0 up by that stage, which is how the game finished.

Gonzalo Veron received his marching orders in the 43rd minute for a two-footed stomp, and it could have proved to be a costly mistake had Bradley Wright-Phillips not bagged himself a hat trick by the 27th minute.

While Wright-Phillips will rightly grab the headlines for his three goals, much credit has to go to Sacha Kljestan who set up two of those goals, and who now has eight assists in 2016 alone; the former Anderlecht midfielder is definitely a key component to this Red Bulls team.

With these three points, the Red Bulls moved up to second place in the Eastern Conference, a solitary point away from Philadelphia Union in first place.

Ola Kamara has been thrust into the limelight since Kei Kamara left Columbus Crew SC for New England Revolution, and he seems to be revelling in it if his performance against Real Salt Lake is anything to base our judgements on.

Salt Lake took the lead on 13 minutes through Luke Mulholland, before Kamara bagged his first goal of the season only four minutes later. Three minutes after the equalizer, Justen Glad put the ball into his own goal to gift Crew the lead.

Kamara then netted his brace on 64 minutes before completing his hat trick 10 minutes later to make it 4-1 to the hosts. However, goals in the 78th and 83rd minute by Jordan Allen and Joao Plata set up a nervy finale for the home fans, but they went home happy knowing their team had won their third game of the 2016 MLS regular season. 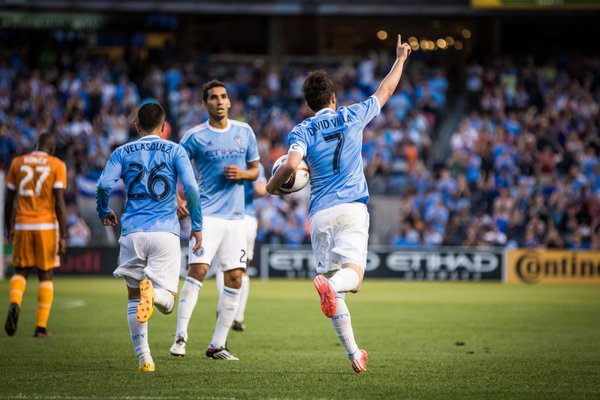 NYCFC threw away a two-goal lead to leave themselves with a less than stellar home record reading 1-2-5, or a mere eight points from a possible 24. This was the fourth time in five games that NYCFC have failed to secure all three points from a winning position, something that is quite worrying for manager Patrick Vieira.

Frederic Brillant’s header on 42 minutes was the difference between the two teams going into half time before David Villa showed his class with a superb finish following a pass from Italian veteran Andrea Pirlo. Villa could and should have had a second goal, but he slipped as he took a 70th minute penalty and the ball flew over the bar.

Julio Baptista pulled a goal back two minutes after the penalty miss, before Kevin Molino equalized in the fourth minute of second half stoppage time to ensure Orlando made the trip home with a point.