Mayweather at his trash-talking best

How does a boxer that is widely criticized for being "boring" end up shattering every pay-per-view and box office record in front of sold-out arenas? With their mouth. Just ask Floyd Mayweather Jr.

If you ask the general public what they want to see in a fight, they'll probably answer "offense" or "knockout." Well, Mayweather doesn't provide much, if any, of that. He's ascended up boxing history with superior defense and decision wins. But what he lacks in in-ring awe ability, he makes of for it ten-fold with his promotion skills, most notably his expertise in getting under the skin of his opponents and spectators. 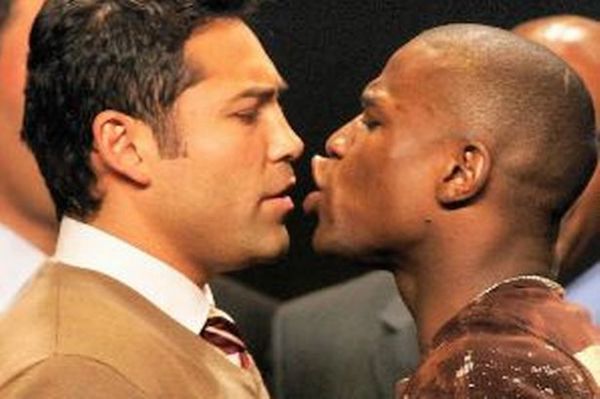 When people pay to watch Floyd Mayweather fight — as in 4.6 million on pay-per-view at $99 a pop for his bout against Manny Pacquiao — most are paying with the hopes of seeing Mayweather lose more than anything. Love him or hate him, people are shelling out their hard-earned money and that's all Money May cares about.

It wasn't easy, but we dug through his two-decade-long career and picked out the best Mayweather quotes. Here they are in all their glory:

"All work is easy work."

Sans "the money team," there's not a phrase Mayweather has uttered more in his career. If not losing wasn't enough to anger Mayweather's slew of naysayers, the ease in which Mayweather wins must really boil them.

In 49 wins, only three have come via split or majority decision. The other 46 were easy Mayweather unanimous decisions or stoppage victories.

"Bob Arum is Manny Pacquiao's boss, Floyd Mayweather is his own boss."

Mayweather spent years taunting Pacquiao before their anti-climatic fight in 2015. His favorite barb at Pac Man, besides the steroid accusations, was his relationship with Top Rank promoter Bob Arum. Up until 2006, Mayweather was also signed under Arum, before breaking off to his start his own Mayweather Promotions.

The deflection birthed his "Money" persona and created a windfall of riches for Mayweather. As his own boss, Mayweather was free to keep the vast majority of his fight profits. The same couldn't be said for Pacquiao, who shared the cut with his boss Arum.

Aside from opponents, Mayweather has also aimed his verbal jabs at ringside announcers, most notably HBO's Larry Merchant. After a controversial win against Victor Ortiz, Merchant drew Mayweather's wrath when he pressed Mayweather about his decision to hit an unguarded Ortiz.

Give Merchant credit, though. Where most others succumb to Mayweather's trash talk, the 70-plus-year-old at the time jawed right back, "I wish I were 50 years younger and I would kick your ass."

Only Mayweather would have a more entertaining post-fight interview than the actual fight.

"I have to take my hat off to Ali but I didn’t give this sport 40 years to say that there’s another fighter better than me."

In an appearance on ESPN, Mayweather ranked himself as the greatest boxer ever, even ahead of Ali. While he lauded Ali for paving the way and championing a cause, Mayweather criticized Ali's rope-a-dope fighting style and win-loss record.

Mayweather's defense-first approach didn't create a lot of excitement in the ring, but it did save him from plenty of punishment. And without taking those unnecessary blows, it's no coincidence why Mayweather has yet to be defeated by father time.

"Of course, we all know what UFC stands for — Undefeated Floyd's Champion."

Mayweather loves acronyms. For instance, he says MGM Grand — where most of his fights have taken place — really stands for "Mayweather Gets Money." That same brash confidence is directed at UFC, where Mayweather's latest opponent hails from.

The bitter rivalry between boxing and mixed martial arts will probably wage forever, but Mayweather knows his place in the feud — at the top with the gold.

After reading through these gem of quotes and looking at Mayweather's undefeated mark, is he really lying here? Not at all.

Did you enjoy this article? Share it!
Tweeter
Follow us!
More articles...
News - 26/05/22
Back the Draw in the Champions League Final

Back the draw in Saturday’s fascinating Champions League final clash. Who do Bettors Favor? Looking at the best sportsbook sites shows that Liverpool are the bookies’ favorite to win the Champions League title for the seventh time. They are rated as +110 with most sportsbooks, while the Spanish giants Real Madrid at +240 and the […]