The Anaheim Ducks are coming off a dramatic Game 7 victory, while the well-rested Nashville Predators have been waiting patiently to see who theyll face next. The two rivals will meet in the Western Conference Final, which gets underway on Friday.

Who is the best in the west?

Here are some betting options to consider, with odds courtesy of Bovada. 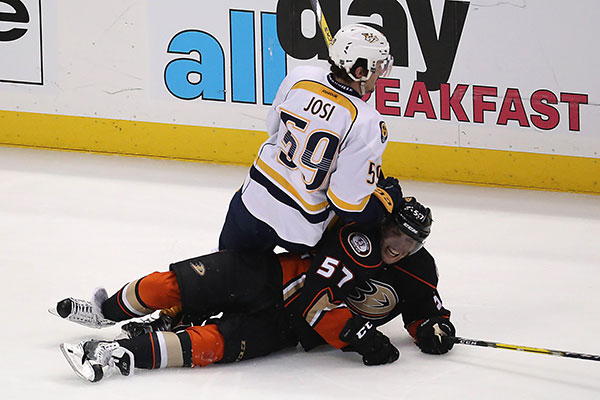 After finally overcoming their Game 7 jinx, the Anaheim Ducks will now look to keep the momentum rolling when they take on the surging Nashville Predators in the Western Conference Final.

This is new territory for the Preds, who have never reached the NHL’s Final Four but head into the best-of-seven series against the Ducks as -125 favorites. After knocking out the powerhouse Chicago Blackhawks in the opening round followed by the always dangerous St. Louis Blues, the Predators face another stiff challenge with the Ducks standing in their way.

The Ducks, who are hoping to get back the Stanley Cup Final for the first time since 2007 when the franchise won its first crown, head into their matchup against the Preds as +105 underdogs.

Home-ice advantage hasn’t meant a whole lot for the Ducks, who have saved some of their better performances on the road.

If you’re looking for some enticing player prop bets for the Western Conference Final, Bovada has you covered.

After such a hot start in the first round, Predators forward Filip Forsberg has cooled off significantly, with his last goal coming April 26 against the Blues. Will Forsberg snap out of his skid and score more than four points in the Western Conference Final? That’s the over/under line Bovada has set with a -115 payout.

Ducks’ captain Ryan Getzlaf was absolutely brilliant in the second round, leading his club to a seven-game win over the Edmonton Oilers. Don’t expect Getzlaf to slow down either, which is why bettors should take the over on Bovada’s total points projecting of six in this series. Getzlaf had four points in a single game against the Oilers and is more than capable of producing the same numbers in the Western Conference Final.

It’s safe to suggest this series will go the distance and will require six or even seven games to determine a winner. If you want to put a wager on the total number of games this series will go, Bovada has set an over/under line of 5.5.

A Ducks’ victory in six games is offering a +550 return on your wager. As strong as the Predators have been in the first two rounds, it’ll be tough for the club to match up with Anaheim’s depth up front.