Germany has yet to showcase its potent offense after two games having only scored twice. But the defending World Cup champions are poised for a breakout game when it wraps up Group C action against Northern Ireland.

Two matches into the Euro 2016 tournament and many are asking where has Germany’s scoring power gone?

With elite forwards Thomas Muller, Mario Gomez and Lukas Podolski yet to score, the Germans have only mustered two goals in a tournament the soccer world thought they’d dominate.

Despite the lack of offense, Germany is still well positioned heading into its final Group C match against Northern Ireland on Tuesday. With four points, the defending World Cup champs can surely book its ticket to the round of 16 with a victory.

Manager Joachim Loew is not concerned about his squad’s offense and believes when all is said and done, Germany will be at the top of the group.

“Our team in all matches creates chances,” Loew told eurosport.com. “I don’t see it as a fundamental problem for us. We always scored many goals. I don’t see an attacking problem after one game.”

Germany is favored considerably in this match as Bovada has the three-time Euro champions at +220 to win by a three-goal margin. Against a Northern Ireland defense that lacks depth, this may be what the struggling German strikers need.

That first goal could very well come in the early stages of the first half as Bovada has a +270 line that the opening marker will be scored in the opening 10 minutes of the match.

Bet365.com has a scorecast line of +900 that Muller nets a goal at any point of the match and Germany walks away with a 3-0 victory. Muller is also favored at +163 to score the match’s opening goal. Kyle Lafferty is pegged at +500 by Bet365.com to open the scoring for Northern Ireland.

Watch for the Germans to put any concerns to bed and make a statement with a convincing victory over Northern Ireland.

Much like Germany, the Polish national team has struggled to produce goals — scoring just one in two games.

Luckily for Adam Nawalka’s side, Poland will get the opportunity to advance to the round of 16 when they close out Group C action against a weak Ukrainian club on Tuesday.

Ukraine has conceded four goals in its opening two matches while failing to score a single goal. Bovada has a +270 line set that Poland will win by a one-goal margin and pegs the White Eagles at an enticing +195 to record a shutout victory.

World-class Polish striker Robert Lewandoski has yet to net a goal in the tournament but remains a strong favorite to score at any point of Tuesday’s match. Bovada pegs Lewandowski at an even line to score against Ukraine.

At the other end, Andriy Yarmolenko is at +200 to net a goal and end Ukraine’s Euro 2016 campaign on a high note after two opening defeats.

This should be a high-scoring affair as Bovada has a -115 line that the match will produce two to three goals — which means Poland can open this game up and easily move on to the knockout stages.

If there were any concerns at the start of Euro 2016 regarding Spain’s chances of contending at the tournament, the two-time defending champs have quelled those questions.

Spain made quick work of both the Czech Republic and Turkey to clinch a spot in the round of 16 and they’ll be looking to finish group play with a perfect record when they face Croatia on Tuesday.

Croatia, which let a two-goal lead slip away against the Czechs, will be desperate to gain at least a point to strengthen its chances of moving to the next round.

Bovada has a +280 line that Spain will pull out a one-goal victory and a +210 line to post a clean sheet win.

Spain striker Alvaro Morata is tied for the tournament lead in goals with two and will be looking to add to that count against Croatia. The Juventus star is pegged at +300 by Bet635.com to score Spain’s first or last goal — a bet worth considering as the 23-year-old now has five tallies in 11 international matches.

While Spain is expected to pull out the victory, Bet365.com has a line of +200 that the game will end in a draw — a likely possibility.

The Czech Republic still have a chance of advancing to the knockout stages of Euro 2016, but they need a victory over winless Turkey in their final Group D match and also hope Croatia loses to Spain.

That would deadlock both sides at four points apiece and require a tiebreaker, which is goal differential.

The Czechs showed a lot of resolve coming back from a two-goal deficit against Croatia to force a 2-2 draw and keep its Euro 2016 campaign alive. 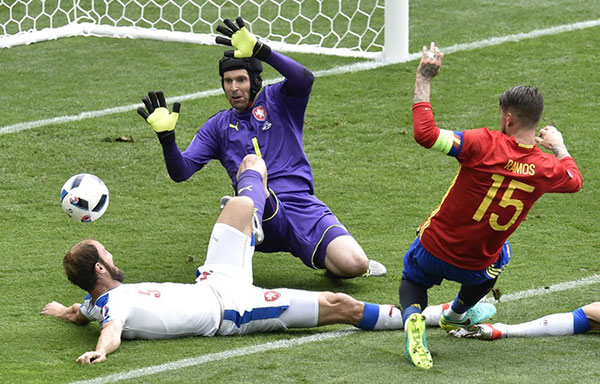 Expect the Czechs to put up a fight that will fall just short, as Turkey, which now has nothing to play for, will look to finish on a high note with a victory.