The World Cup field has been whittled in half and the presumptive favorites, Germany, aren’t a part it. Whether you had the Germans repeating as champions or not, now is the perfect opportunity to re-visit that World Cup winners futures bet. Here’s which teams you should be eyeing!

You've heard about the "group of death" but what about the "side of death?" One side of the knockout stage bracket resembles just that.

That side consists of powerhouses like Argentina, Brazil, Belgium, France, Portugal, and Uruguay. Between that group, you have four countries that are former World Cup winners, the reigning Euro champions, and a Belgium side that's scored more goals (9) this tournament than anyone else. Yikes!

By comparison, the opposite bracket looks like a walk in the park. After Spain, it's a steep drop-off with good-but-not-scary-good countries like Columbia, Croatia, England, and Switzerland, among others.

Not convinced yet? Take FIFA's World Rankings for reference. Five of its top-10 ranked countries are in the "side of death," whereas only two top-10 teams are on the other side.

This information — along with what transpired during the group stage — should make you think twice about that World Cup futures bet you made before the tournament began. Is your pick still destined to win it all or are you ready to jump on another countries bandwagon? We're here to help you decide!

Before we get started, big thanks to Bovada for the below odds! Check them out, not only for this futures wager, but for every knockout stage matchup!

Bovada's odds-on favorite to win the World Cup comes as no surprise. Brazil more or less cruised through the group stage with a pair of 2-0 victories over Serbia and Costa Rica, but did draw 1-1 versus Switzerland.

While the score sheet doesn't necessarily show it, Brazil hasn't quite kicked into high gear yet. A spark has been missing, namely from the team's enigmatic leader Neymar, whose made more headlines this tournament for feigning injuries than actual plays on the pitch. 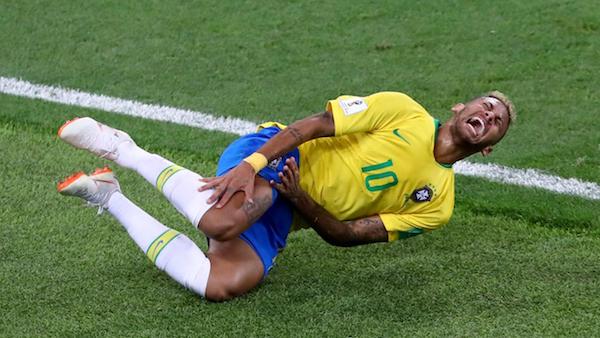 With a dynamic talent of Neymar's caliber, the possibility of flipping the "on switch" is always high, but we're just not sold. Here's a stunning stat to consider: Neymar has lost possession of the ball a tournament-high 88 times — 22 more than the next player. Without a sharp Neymar, we're skipping out on the Selecao.

Even if Spain found themselves in the "side of death," La Roja would still be top contenders to hoist a gold trophy. However, avoiding that treacherous path makes them a no-brainer pick here.

On paper, Spain is arguably the most stacked team remaining in the field. They're a perfect mixture of experience and youth. Seven holdovers remain from their 2010 title run, while newcomers such as striker Diego Costa and keeper David de Gea are world-class players. This bunch hasn't lost a match since the 2016 European Championship.

Though, concerns do linger, namely the firing of manager Julen Lopetegui two days before the team's World Cup opener. Without Lopetegui roaming the sideline, La Roja has somewhat underwhelmed thus far. They tied twice, 3-3 against Portugal and 2-2 with Morrocco, but still won the group thanks to a 1-0 victory over Iran.

Wagering on Spain remains a good-value bet, but we sense they could be overwhelmed in the Finals by the next foe...

The team that began as everyone's favorite dark horse now has the third-best odds at claiming a championship, and in our book, is the pick to make here.

Belgium features a three-headed monster of Kevin De Bruyne, Eden Hazard, and Romelu Lukaki — the core nucleus of arguably the field's most-dangerous attack. Even before hanging nine goals in the group stage, this Belgium side tallied an eye-popping 43 goals in World Cup qualifying stage.

With a roster dotted with players in their mid- and late 20s, this is Belgium's time. While the country has never made it past the quarterfinals before, and the World Cup historically favors the same few teams, this tournament has already proved anything can and will happen, including Belgium winning the whole damn thing.

If Spain somehow stumbles to make it out of the "easy" side of the bracket, it might be because of the upstart Croatians. Along with Belgium and Uruguay, Croatia is the lone country to earn all nine points in the group stage — which included a 3-0 humiliation of Argentina.

There's no real weakness on the Croatian side. With playmakers across the midfield and front line, Croatia has netted seven goals thus far. An equally-impressive defense has conceded just one score.

At +1000, Crotia is a solid value proposition, especially playing in the weak-sided bracket.