Like a well-oiled machine, the German national team is beginning to gain steam at Euro 2016. The 2014 World Cup champs will have a tough test when they face a pesky Slovakia team in a round of 16 match on Sunday.

It took Germany a little while to get rolling at Euro 2016 but the defending World Cup champions are right on track to contend for another title at a major competition. They’ll first have to get through a Slovakia team with a lot to prove as the countries clash in a round of 16 match on Sunday.

Germany advanced to the knockout stage after topping Group C with seven points, while Slovakia’s four points in Group B was good enough to send them through as one of the four best third-place finishers.

The Germans have struggled offensively for the most part, having scored just three goals during the group stage. However, it was Germany’s defense that carried them to the next round as Joachim Loew’s side has yet to concede a goal in the tournament.

“We only scored three goals, if you want to put it like that,” German defender Mats Hummels told dailymail.co. “But we didn’t concede one, so that’s a good basis for the rounds to come.”

These two countries met in an international friendly prior to the tournament, with Slovakia walking away with a 3-1 victory. In 28 previous meetings, Germany has dominated the head-to-head match with 17 victories while also outscoring their opponents 62-40.

Germany is a heavy favorite to win this game, but Bovada has a +225 line that they will take it by a one-goal margin. The way the German offense has been going in the tournament, that scenario seems logical. But keep in mind German strikers Thomas Muller and Mario Gomez, who have been rather quiet so far, can break the game open at any point. Muller is a +330 favorite to score the match’s opening goal and is pegged at +125 to score at any point of the game. 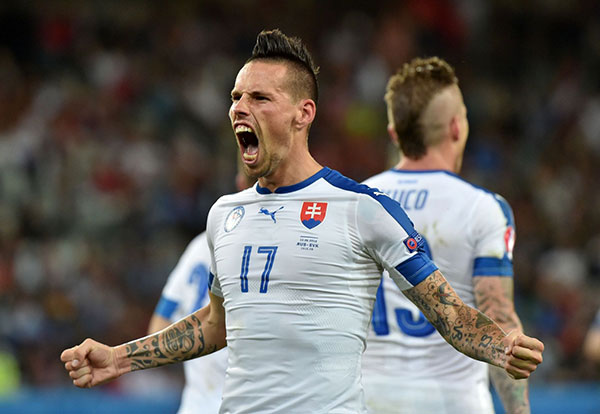 Slovakia may lack star power up front, but their depth at the forward position will keep the game close against Germany. Look no further than Marek Hamsik to score for Slovakia — Bovada has the Napoli midfielder at +650 to net his country’s opening marker.

Expect Germany to dominate the possession game, much like they have all tournament long. The Germans have a total of 21 shots on target compared to Slovakia’s seven. That will definitely come into play when the teams meet in the knockout round.

Germany is in another league, and even though the match will be close early on, expect the world champions to deliver a knockout blow to Slovakia.