We’re days away from Selection Sunday and while the March Madness bracket is far from set, you can bank on these teams making noise during the Big Dance. See who we have cutting down the nets!

The Bulldogs have yet to lose a game this season, so why aren't they the perennial favorites to win it all? Look no further than the conference Gonzaga plays in — West Coast. Being unbeaten is impressive, but beating up on teams like Pacific and Pepperdine makes bettors understable uneasy.

A closer look at the Bulldogs schedule shows just how weak it's been. They rank 101 in the nation in strength of schedule. Moreover, the program is prone to falling short during the NCAA Tournament. They've qualified for the Big Dance every year since 1999. Yet, they've made it past the round of 32 only seven times.

And it's not only history going against Gonzaga. The last team to complete a perfect regular and postseason is North Carolina State in 1973. Just recently, perfect seasons from Wichita State and Kentucky were halted during March Madness. We're staying away from the Bulldogs. 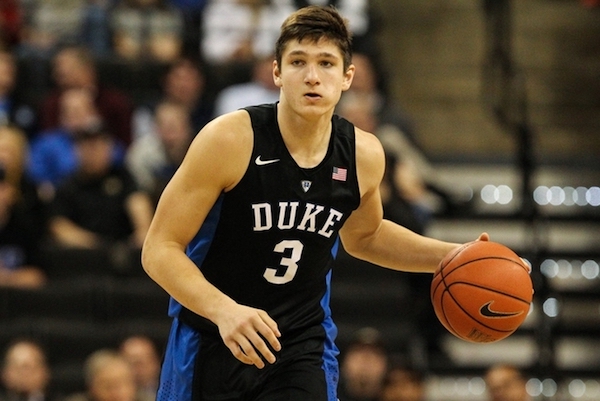 The Blue Devils are the odds-on favorites to win it all. That's not surprising. As much as a crap shoot the NCAA Tournament is, we know getting hot at the right time is the best predictor of success. If Duke can play like they have in recent weeks, then watch out.

The Blue Devils have won seven of their past eight games, with notable road wins against Notre Dame and Virginia. Overall, Duke has just six losses all season. 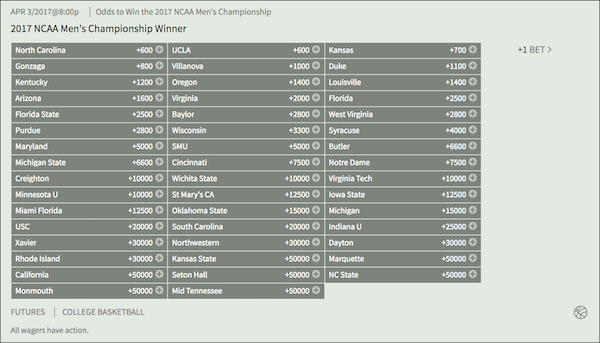 The focus is on Grayson Allen. Say what you want about his antics, but the 21-year-old is a flat out baller. Turf toe, foot, and now a pinky injury has slowed Allen and it's in head coach Mike Krzyzewski to keep track of his minutes.

The Blue Devils are two years removed from winning the NCAA Championship, so experience isn't lacking here. Picking Duke is the safe pick, but we're going against the grain on this one as the Blue Devils will fall short of their sixth national championship.

There's a lot of debate about who is the best player in the country right now. There are cases to be made for Kansas' Frank Mason or Josh Hart of Villanova, but we're going with freshmen phenom Lonzo Ball. The six-foot-six point guard has burst onto the scene by averaging 15.4 points per game, 7.6 assists, and 6.1 rebounds per game. He'll be gone once the tournament ends and a possible top pick in the NBA Draft.

But for the time being, Ball is the type of player that will take over games. Draft stocks rise and fall during the NCAA Tournament, but we'll bet Ball is in the former category.

With that said, here's a word of caution with UCLA: their strength of schedule ranks 89th in the country and the Pac-12's sixth-ranked RPI is last among major conferences. The Bruins have upset alert written all over them.

In the words of Ric Flair, to be the man, you got to beat the man. And until the championship crown is taken from the Wildcats, you can't count them out. The defending champions have lost just two games this season.

However, betting on back-to-back title runs is flat out crazy. I mean, no one has repeated as champions since Florida in 2006 and 2007. And that's why we're betting the Wildcats to win the national title. People are just counting them out automatically. That target that follows championship teams doesn't seem to be as big with them. And as players like Kris Jenkins and Josh Hart proved during last year's Big Dance, they have ice in their veins.