NBA picks and tips for Saturday

The red-hot Milwaukee Bucks hit the road for a match against the struggling Washington Wizards, who have dropped three of their last five games. Meanwhile, Dwyane Wade will face off against his former club on Saturday night.

Which bets to take on Saturday

Here are a few NBA betting options to keep in mind, with odds courtesy of Bet365.com.

Having won just two of their last five games, the Washington Wizards hope to get back on winning track on Saturday when they host the Milwaukee Bucks at the Verizon Center.

The Wizards, who are 5-5 over their last 10 games, enter Saturday’s contest as -192 favorites. The Bucks — winners of five of their last seven contests — are intriguing +167 underdogs on the road, where they’ve struggle a little bit this season.

Giannis Antetokounmpo, who leads the team in almost every statistical category this season, has carried the Bucks. Antetokounmpo — or The Greek Freak as he’s also known — is averaging 21.6 points per game to go along with 8.8 rebounds per game and 5.9 assists per game.

Wizards’ star guard John Wall will be a handful for the Bucks defense, which is averaging a fifth-best 5.7 blocks per game this season. Wall leads all Washington players with 23.6 points per game, which 14th overall in the NBA.

Washington has owned the head-to-head battle against Milwaukee over the last 10 meetings, winning seven times over that stretch.

Betting the over/under? Bet365 has set the total points projection at 210.5, but don’t expect these average scoring clubs to go over. 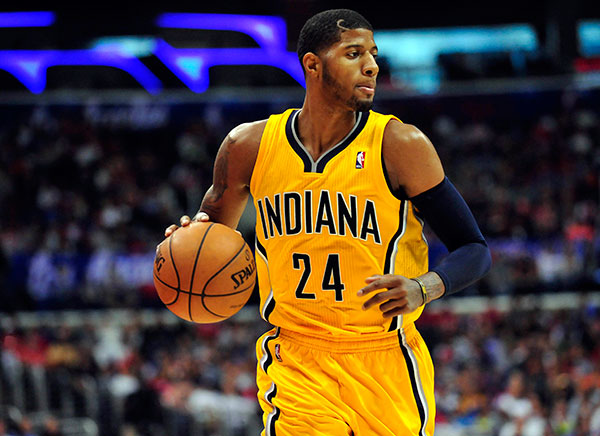 The Trail Blazers look to shake off a two-game losing streak on Saturday night when they travel to the Indiana to face the Pacers at Bankers Life Fieldhouse.

Back-to-back defeats saw the Trail Blazer slip to the eighth and final playoff spot in the Western Conference. With a 5-5 record over its last 10 matches, Portland enters action on Saturday night as -120 favorites. The Pacers, who have won two of their last five games, are +100 underdogs at home where they’ve played their best basketball this season.

Paul George, who’s name continues to be tossed around in trade rumors, is one of the main reasons why the Pacers have been able to remain in the playoff hunt. The three-time NBA all-star is averaging 20.8 points per game to go along with 7.4 rebounds per game.

The Trail Blazer will have to be aware of Indiana’s strong defense, which is third in steals per game this season. Damian Lillard continues to be one of the NBA’s best point-getters, as the guard ranks sixth in league scoring with 27.6 points per game.

Both these clubs are capable of scoring, so consider taking the over on Bet365’s total points line of 217, with the Pacers pulling out a close victory.

Dwyane Wade will face his former mates on Saturday when the Chicago Bulls host the Miami Heat at the United Center.

After helping Miami win three NBA championships, Wade left the Heat in the summer to ink a deal with the Bulls — his hometown. The move has paid off for Wade as the Bulls sit sixth in the Eastern Conference and enter Saturday night’s contest as convincing -625 favorites. The Heats, who have struggled all season, are +450 underdogs on the road.

The Bulls have been paced by star forward Jimmy Butler, who is 10th in league scoring with 25.4 points per game this season. Wade is not far behind at 19.9 points per game.

Chicago ranks second in rebounds per game in the NBA thanks to Taj Gibson and Robin Lopez, who average 7.9 and 7.8 boards per game, respectively.

Miami still holds the slight advantage over the last 10 meetings between the two clubs, winning six times over that stretch dating back to the 2014-15 season.

The opening point spread line had the Bulls as -7.5 point spread favorites. Expect this to game to open up with the Bulls pulling away down the stretch.