Detroit has had little to no success on the road, so a home game couldnt come at a better time for the Pistons, who will look to break a four-game losing streak against the Miami Heat. Also, the San Antonio Spurs take an unblemished road record into Charlotte where theyll face the Hornets.

Which NBA Games You Should Bet On

Here are a few NBA betting options to consider for Wednesday night, with odds courtesy of Bet365.

There’s no better time for the Detroit Pistons to play on home court, where they’ve had much of their success this season. Coming off four straight defeats, the Pistons will look to get back in the win column on Wednesday when they host the Miami Heat at the Palace of Auburn Hills.

Detroit has lost four straight and six of their last eight, but still enter Wednesday’s matchup as -185 favorites. The Heat, who have struggled on the road, are +165 underdogs.

The Pistons, who’ve been dreadful on the road, are 5-2 on home court this season.

The matchup will pit two of the best rebounders in basketball — Miami’s Hassan Whiteside, who leads the league with 15.9 boards per game, and Andre Drummond who ranks second overall with 13.9 rebounds per game.

Head-to-head, Miami has defeated the Pistons six of the last 10 meetings and enter Wednesday’s contest having won two straight against Detroit.

The Pistons and Heat are among the bottom five teams in scoring this season, so don’t expect the clubs to go over Bet365’s total points line of 189.5. In fact, the last four meetings between these two Eastern Conference rivals have resulted in under outcomes.

One of only two teams in the league yet to lose on the road, the San Antonio Spurs will look to keep that record intact when they travel to Charlotte on Wednesday night to face the Hornets.

The Spurs — winners of six straight games — enter Wednesday’s matchup as the expected -192 favorites, while the Hornets, who are hoping to snap a two-game losing streak, are the +167 underdogs.

Charlotte will have its hands full with Spurs forward Kawhi Leonard, who is arguably the best defender in the NBA. Leonard has proven that once again by ranking third in steals, averaging 2.3 per game. The Hornets, however, are averaging 11.2 turnovers per game — the fewest in the league.

The Spurs aren’t just all about defense though as the team is shooting 39.5 percent from three-point range, which is better than any other NBA club.

The head-to-head history over the last 10 games has gone San Antonio’s way, as the Spurs own a dominating 9-1 record over that period. If you’re considering a point spread wager, Bet365 pegs San Antonio as -4.5 favorites as well. The Spurs have won their last three games by five or more points, so expect them to cover against the Hornets with ease. 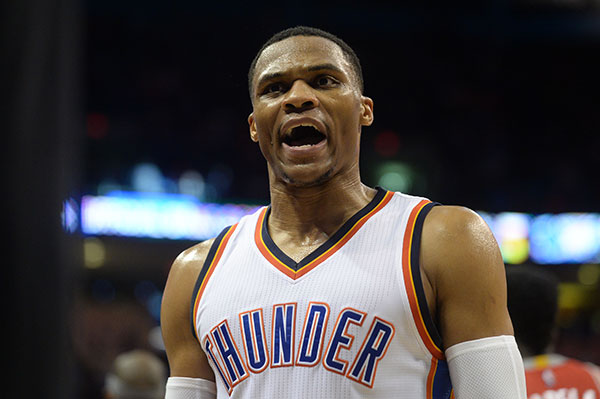 The reeling Oklahoma City Thunder will look to get back on winning track Wednesday when they face the Sacramento Kings at the Golden 1 Center.

The Kings, out of the playoff picture with a 5-9 record, are the -147 favorites heading into action on Wednesday. Oklahoma City, losers of two straight games and six of the last eight, are +125 underdogs.

Thunder all-star point guard Russell Westbrook has been carrying the team all season long and leads the league in scoring, averaging 31.8 points per game. Westbrook also tops all OKC players in rebounds (9.6) and assists (10.6).

DeMarcus Cousins is sure to give OKC defenders fits on Wednesday as the Kings’ bigman has averaged 26.9 points per game this season — tied for sixth in the league.

If the head-to-head history between these two clubs is any indication, expect the Thunder, who have won seven of the last 10 meetings, to come out on top once again.

The over/under line is set at 210.5, which seems like a lot of points, but keep in mind three straight games between the Thunder and Kings have produced over results.