Coming off a poor performance on home ice to open the Eastern Conference final against the Tampa Bay Lightning, the Pittsburgh Penguins must rebound or they will head to Florida down 2-0 in the series. 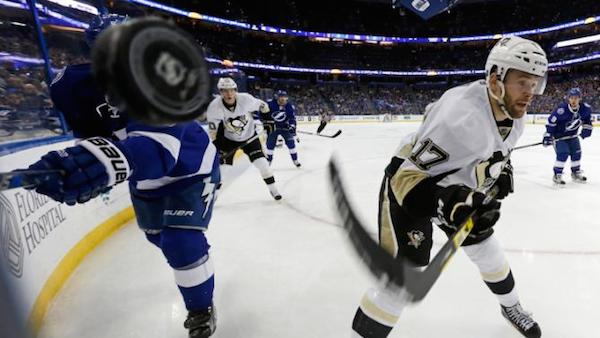 A series-opening game riddled with injuries and borderline hits will leave just one player out of the lineup for Game 2. Even though Tampa Bay coach Jon Cooper wouldn't rule him out, Lightning goalie Ben Bishop, stretchered off the ice after suffering a first-period lower-body injury, is highly unlikely to be ready for Game 2 but isn't hurt nearly as badly as originally feared and is listed as day to day.

That leaves Tampa Bay's goaltending in the capable hands of Andrei Vasililevskiy, 21, who has stopped 61 of 66 shots in a pair of wins over the Penguins this season. Kristers Gudlevskis, who starred for Latvia in the 2010 Winter Olympics, will back up Vasilevskiy.

Pittsburgh coch Mike Sullivan didn't hesitate to announce that he was sticking with rookie Matt Murray, also 21, as his goalie even though he lost Game 1 and veteran Marc-Andre Fleury is healthy and good to go. There are signs that Murray is slowing down, though. He was beaten three times on 20 shots in Game 1 and has surrendered three goals in each of his last three games, dipping his save percentage to .885 over those three games.

Lightning defenseman Anton Stralman (fractured fibula), second on the team among rearguards during the regular season with 34 points, took part in five-on-five drills at Sunday's practice but there's still no indication as to when he might be ready to play.

Lightning captain Steven Stamkos (blood clot) skated with the regulars Sunday but his status was not updated to offer any idea as to when he might return to action.

Pittsburgh defenseman Olli Maatta, who has struggled to find consistency since returning from a three-game absence due to an upper-body injury, did not skate with the regulars at practice Sunday and is likely to be scratched for Game 2. Justin Schultz took Maatta's place in the third defensive pairing.