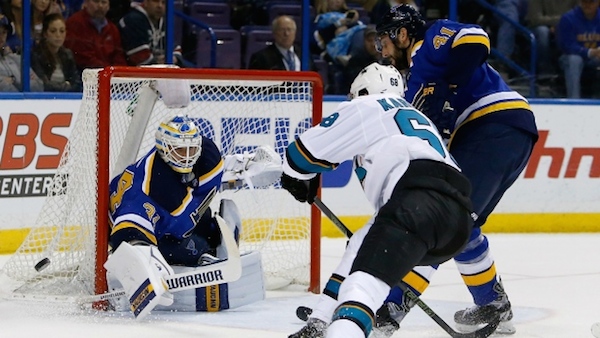 Has Ken Hitchcock gone mad, or is the coach of the St. Louis Blues simply crazy like a fox? Hitchcock is switching netminders for Game 4, going to Jake Allen over Brian Elliott, who has carried the load for the Blues in the playoffs, starting all 17 games and posting nine wins. It might seem like a knee-jerk reaction or a move that smacks of panic, but the fact of the matter is Elliott has not been impressive in this series.

His save percentage in the last two games is a dismal .837. Elliott made a paltry 11 stops in their 3-0 Game 3 defeat. Elliott's 2.34 goals-against average is barely above the league playoff average of 2.38. Allen is the more active netminder in terms of puckhandling and Hitchcock believes his insertion will force the Sharks to alter their forechecking strategy.

That being said, Allen, who has made two mop-up apperances in the playoffs, has posted a middling 11-7-1 record since Feb. 22 and his career playoff marks of a 2-4 record and .910 save percentage aren't what would be described as awe-inspiring.

At the other end, the Sharks have no such goaltending controversy. Martin Jones has posted back-to-back shutouts. He has three shutouts in his last four games and is 10-5 with a 1.89 GAA and .927 save percentage. Jones has started all 15 of San Jose's games and is the only goalie left in the playoffs who has yet to be relieved by his backup.

Hitchcock sounded like he planned to stay with his new-look fourth line of Dmitrij Jaskin and Magnus Paajarvi, who saw their first action of the series in Game 3, along with Kyle Brodziak. The Blues have gone 150:35 since scoring their last goal, Jori Lehtera's game winner at 9:15 of the second period in their 2-1 verdict in Game 1.

The Blues stayed off the ice Friday and didn't hold a morning skate Saturday, fueling speculation that the team is growing fatigued after playing back-to-back seven-game series and being further worn down by the phyiscally punishing, grinding style that the Sharks prefer to play.

San Jose has won six straight home games after dropping six of the previous eight at the SAP Center. Sharks forward Tomas Hertl recorded his first career multi-goal game in Game 3 and San Jose's top line of Hertl, Joe Pavelski and Joe Thornton has combined for 17 goals and 38 points in the playoffs.