Coming home off a solid 4-0 victory in Game 2 at St. Louis over the Blues, the San Jose Sharks will look to do something they’ve never achieved in three previous Western Conference final appearances – take a lead in the series. 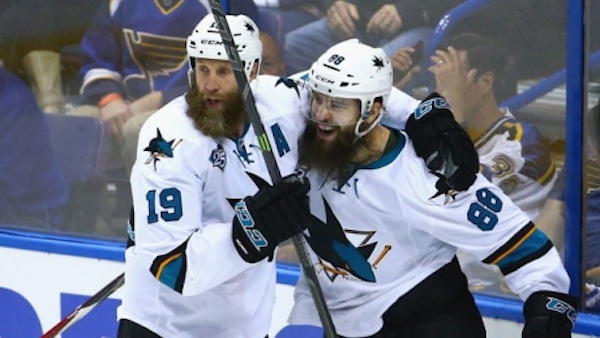 Back on home ice at the SAP Center afer a stellar performance to take Game 2 of this series by a 4-0 count to pull even in the set, the Sharks will seek to do something they've never done in franchise history, and that's grab a lead in the Western Conference final. In 2011 they dropped the first two games en route to a five-game setaback agains the Vancouver Canucks and the Chicago Blackhawks swept the Sharks in 2010. In 2004 against the Calgary Flames, San Jose rallied to win Games 3 and 4 to pull even at 2-2, but then were ousted in six games.

Home ice wasn't kind to the Sharks during the regular season. They went 18-20-3 at the SAP Center, the fewest home-ice wins collected by any of the NHL's 16 playoff qualifiers. But they've been a solid 5-1 at home in the playoffs, winning all four games at home in the second round against the Nashville Predators. The Blues are 5-2 on the road in the playoffs and have won three straight away from home.

As has been his wont following a loss during the playoffs, St. Louis coach Ken Hitchcock was contemplating lineup changes, though he declined to elaborate further. Steve Ott, who had no shots on goal and took two penalites in Games 1 and 2, could be a likely forward to come out, with Dmitrij Jaskin or Ryan Reaves available to slot into his place. On defense, Hitchcock has switched in Robert Bortuzzo for Joel Edmundson in past games.

Sharks captain Joe Pavelski (9-6-15) has a point in 10 of 14 playoff games this spring. His next goal would set a club single-season playoff mark. Sharks forward Dainius Zubrus notched a goal and an assist in Game 2, his first Stanley Cup points since the 2012 playoffs.