In eight of the last 10 Super Bowls, the underdog has covered the spread. Will the Eages at four-and-a-half-point underdogs follow the trend? We have your most in-depth Super Bowl preview, along with our betting picks!

My Team's Next MatchPhiladelphia Eagles

Roger Staubach, Terry Bradshaw, Jim Plunkett, Doug Williams, Kurt Warner, Tom Brady. What do these legendary quarterbacks have in common? They've all won a Super Bowl as a backup. Will Nick Foles join the elite company?

Even after six years in the NFL and five starts this season, Foles remains very much a mystery. A career 87.4 quarterback rating is as middling as it gets. However, flashes of brilliance are scattered throughout, including a seven-touchdown performance years ago and completely carving up a stingy Minnesota defense in the NFC Championship.

The good Foles needs to show up on Sunday for the Eagles to have any chance, which is very doable. First, don't expect Foles to beat himself. He's thrown zero picks this postseason. But expect Foles to push the ball down the field, akin to the Vikings game — no really.

Philly has home-run threats up-and-down its wide receiver corps. Alshon Jeffrey, Nelson Algohar, and Torrey Smith can all beat you big. But even more so than that, a deep bomb will keep the Patriot defense honest — and open up the run game, which the Eagles desperately need to establish.

With their three-head monster of Jay Ajayi, LeGarrette Blount, and Corey Clement, Philadelphia has proven it can pound the rock with the best of them. During the regular season, they racked up the third-most rushing yards in the NFL.

Ajayi really has to be the key cog. After being acquired at midseason, he's now grown into the centerpiece of the offense. He should have success against a New England defense — one he's familiar with dating back to his days with the Dolphins — that ranked 20th against the run in 2017.

Undoubtedly, the Eagles will try to hurry Brady and company. The Giants of years past have proven that's the blueprint for beating the dynasty. However, it'll be easier said than done.

Throughout the regular season, Brady was sacked, hit, or hurried a meager 31.4 percent of his dropbacks — the eighth-lowest rate in the league. That's due to a stout New England offensive line and Brady's uncanny ability to get the ball out of his hand laser-quick.

By all accounts, this swarming Philly defense is elite. They rank high in nearly every defensive category — total yards (fourth), rushing yards (first), and points (fourth). However, their Achilles heel has been stopping tight ends — and well, the Patriots happen to have the best one in the league.

Players like Travis Kelce, Jordan Reed, and Evan Engram all racked up big days against the Eagles this year. The recently-cleared from concussion Rob Gronkowski will pose as an even bigger mismatch, especially in the red zone.

Speaking of which, Sunday's game will hit the over for that very reason. Philadelphia and New England ranked two and three, respectively, in converting red zone trips into touchdowns. Don't expect either to leave points on the field. 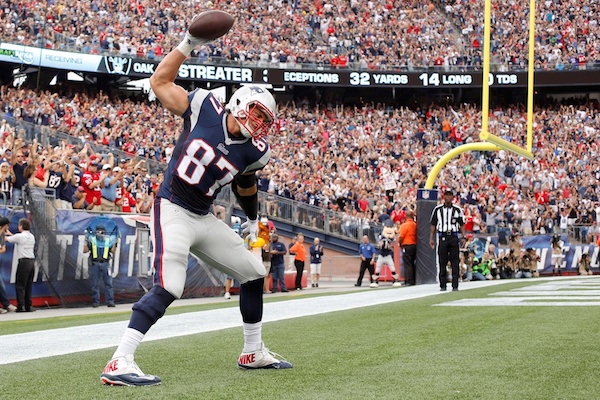 Akin to Gronk, the Eagles have their own big target in the red zone in Zach Ertz. Since Foles became the starter, Ertz has been his go-to receiver with 28 catches for 286 yards. Bill Belichick is famous for designing game plans around stopping certain players. On Sunday, Ertz might be that fixation.

Lining up across Ertz most of the game will probably be safety Patrick Chung. Warp your head around this stat: Chung has allowed an average of 1.3 receptions for 13.1 yards per game while covering tight ends this season. The see-saw matchup between Ertz and Chung could very well decide this game.

An Eagles win would be the biggest Super Bowl upset in a decade. While it's plausible, we're not banking on it. It's tough to imagine Foles, in his fourth playoff start ever, outgunning the greatest of all time, Brady.

This matchup is eerily reminiscent of the last time these two met with the Vince Lombardi Trophy on the line 13 years ago — the grizzled veteran Patriots playing in their third Super Bowl in four years against an inexperienced bunch. That one ended in a 24-21 New England victory.

It'll be deja vu on Sunday — albeit with a few more points. Still, that's enough for the Eagles to continue the Super Bowl trend and cover as underdogs.