In a potential preview of the NBA Finals in 2017, the Golden State Warriors will host the red-hot Toronto Raptors Wednesday night at Oracle Arena. In other action, the Washington Wizards will host the Indiana Pacers in whats sure to be a high-scoring match.

Here are a few NBA betting options to consider, with odds courtesy of BetOnline.

The Golden State Warriors have picked up from where they left off during last season’s record-setting run. The Western Conference leading Warriors will be back on the court Wednesday for a game against the surging Toronto Raptors.

The Warriors have won seven of their last eight games and enter Wednesday’s contest as convincing -470 favorites on home court, where they’ve lost just twice this season. The Raptors — winners of four straight — head into Golden State as appealing +395 underdogs.

This match will pit two of the top offensive teams in the league as the Warriors lead the NBA in scoring, while the Raptors come in at No. 3. The Warriors and Raptors are first and second, respectively, in field goal percentage with Golden State averaging a league-leading 49.5 percent.

Don’t let the head-to-head history scare you away from placing a wager. The Warriors have won eight of the last 10 games against the Raptors dating back to the 2012 season.

The total points projection for Wednesday’s highly anticipated contest is set at 225.5 — a mark these two high-scoring clubs will surpass with ease. Expect another tight match with the Warriors coming out on top. 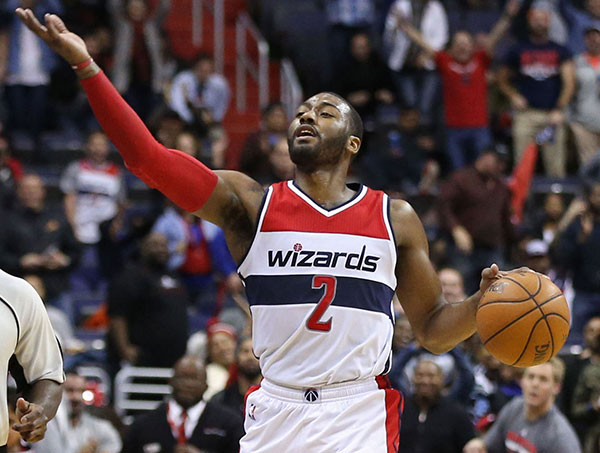 Two teams on the outside of the playoff picture looking in, the Washington Wizards will play host to the struggling Indiana Pacers on Wednesday night.

The Wizards — winners of five of their last seven games — enter Wednesday’s match as -190 favorites on home court, where they’ve posted an impressive 11-6 record at the Verizon Center this season. The Pacers haven’t had much luck of later, losing three straight games as they head into Washington as +165 underdogs.

Both the Pacers and Wizards have struggled defensively, allowing more than 105 points per game during the 2016 campaign. However, the Pacers are averaging 5.6 blocks per game, which ranks fifth in the NBA and the Wizards are tied for third overall in steals with 8.7 per game. 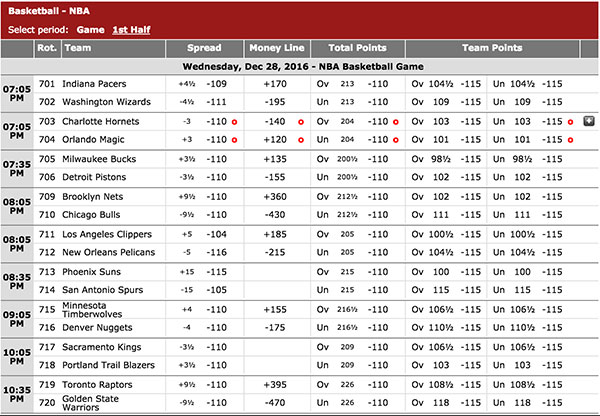 The Wizards will want to avoid getting into foul trouble against a Pacers team that is shooting over 80 percent from the free-throw line.

Indiana has been dreadful on the road this season, posting a 4-12 record away from Bankers Life Fieldhouse.

This is the second meeting of the season between these Eastern Conference rivals as the Pacers walked away with a 107-105 victory.

BetOnline has set the total points projection at 213 for Wednesday’s match. Seven of the last eight games between the Pacers and Wizards have produced over outcomes.

Coming off their biggest win of the season, the Detroit Pistons will look to get back into the playoff race on Wednesday when they host the visiting Milwaukee Bucks at the Palace of Auburn Hills.

The Pistons — who defeated a LeBron-less Cleveland Cavaliers team — enter the home match as -165 favorites, despite going 3-7 in their last 10 games. The Bucks — losers of three of the last four — head into Detroit as intriguing +145 underdogs.

Andre Drummond continues to be a monster on the boards as the Pistons big man sits second in the league in rebound, averaging 13.5 per game.

However the Pistons’ defense will have its hands full with Bucks forward Giannis Antetokounmpo, who leads his teams in several stat categories. Antetokounmpo is averaging 23.4 points, 9.1 rebounds and 5.8 assists per game.

The Pistons have won six of the last 10 meetings against the Bucks — the last coming in October when Detroit won 98-83 at home.

Considering a point spread wager? Bettors should jump on the -4 line for the Pistons, who are allowing the second fewest points per game this season.