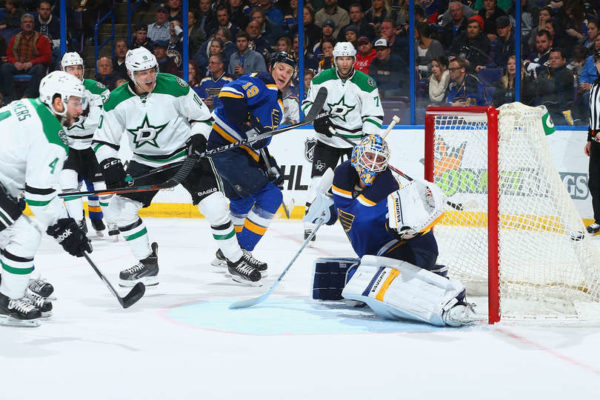 Is Ken Hitchcock playing mind games, or is he seriously pondering a goaltending change prior to the most important game of the season for his team? Brian Elliott, who started all 13 of the Blues' playoff games so far this spring, was hooked from Game 6 after allowing three first-period goals and Hitchcock claimed he hadn't decided whether to go with Elliott or Jake Allen for their win or go home Game 7 against the Stars.

Meanhwile, the suspect netminding situation for the Stars seems to have settled down. Kari Lehtonen was solid in Game 6, making 35 saves. Dallas center Jason Spezza also got off the snide, potting his first goal of the series and it proved to be the game winner. Dallas forwards Tyler Seguin (Achilles) and Travis Moen (hand) are out but forwards Patrick Sharp and Radek Faksa, both shaken up during Game 6, are good to go.

Expect the Blues to shuffle their lineup. It's been Hitchcock's pattern following every loss in the playoffs. Steve Ott or Ryan Reaves could come in at forward for Dmitrij Jaskin. Defenseman Joel Edmundson, a healthy scratch for Game 6, might also be back. Blues forward Troy Brouwer will be playing his 11th consecutive Game 7 since 2011, a Stanley Cup record.

Hitchcock is 4-2 in Game 7, while Dallas coach Lindy Ruff is 0-3. This is the fourth Game 7 in 13 playoff series between the two teams, although all four previous occasions came while the Stars were still the Minnesota North Stars. The Blues took decisions in the 1968 and 1972 playoffs, while the Stars vanquished St. Louis in 1984. It's the first Game 7 for the Stars since 2007, while the Blues just went seven with the Chicago Blackhawks in the opening round.