Why You Should Bet on Raptors and Spurs Monday Night

Now that the NBA second round is tipping off, fewer teams are part of the equation. And when there are fewer teams from which to choose, you have to maximize your betting opportunities. We’re here to help you do just that with our favorite spread picks for Monday night, which come courtesy of TopBet.

Why You Should Bet on Raptors and Spurs

Offense meets defense in this rematch of the 2016 Eastern Conference Finals.

The Cleveland Cavaliers enter Game 1 having posted the second best offensive rating through the first round. The Toronto Raptors, meanwhile, placed second in points allowed per 100 possessions during the fist round. This series, in many ways, will come down to which squad can do a better job boosting their weaknesses.

On the surface, that bodes well for the Raptors. They were a good offensive team during the regular season. They once again placed in the top 10 of points scored per 100 possessions. It wasn't until after the All-Star break they figured out things on the other end; they closed the season from that time with a top-three defensive rating. 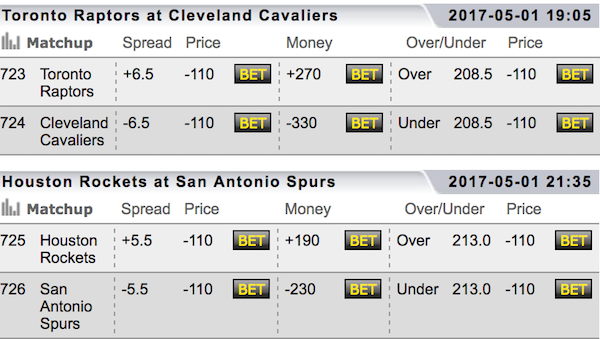 Here's the thing: Though the Cavaliers' starting lineup is coughing up more than 111 points per 100 possessions for both the playoffs and regular season—equivalent of the worst mark in the league—they actually showed progress in the first round sweep of the Indiana Pacers.

It wasn't wire-to-wire progress, to be sure. But they are fourth in defensive rating during the final two quarters for the playoffs, and they rank second for the postseason in crunch-time defense. Against a team like the Raptors, who struggle to move the ball in volume on a regular basis, they should be able to bring some of their late-game swagger into earlier stretches. And that doesn't bode well for the Raptors.

All this said, Game 1 is always a feeling-out process. Both these teams will be trying to get a read on how the other plans on winning this series. That paves the way for a tightly contested affair, even if said point margin isn't totally indicative of what's to come.

Once again, we're back to something boding well for the Raptors.

A lot of people are worried about how the San Antonio Spurs match up with the Houston Rockets.

Over the past few years, as the core as aged and the Spurs have turned to a more half-court offense, they have semi-routinely been exploited by super athletic squads. They lost to the Los Angeles Clippers, a faster team than them at the time, in the first round of the 2015 postseason. They were run off the court by the Oklahoma City Thunder in the second round of the 2016 playoffs. And then, while beating the Memphis Grizzlies in the first round this year, they at times looked like the less athletic team—a monstrous issue when you consider the Grizzlies are about as lumbering and purposely slow as you can get in today's NBA.

Put this Spurs team against a Rockets squad that likes to get up and down the floor, run four-out and five-out lineups and shoot a ton of threes, and they're liable to implode once again.

But San Antonio has the personnel to combat three-point barrages. It can run Kawhi at the 4 with Dewayne Dedmon at the 5, and basically just switch everything. And always, head coach Gregg Popovich will get enough half-court offense out of his troops to get by.

What helps the Spurs even more is that Patrick Beverley, a hellish defender, cannot remove their best scorer from the equation. He was able to suffocate Russell Westbrook at points, but he cannot spend protracted stretches on Kawhi Leonard. He won't survive.

Bet on balance prevailing in Game 1, then take the series from there.