Antonio Conte’s side shocked the soccer world after defeating Belgium 2-0 in their Euro 2016 opener. The celebrations were short-lived for the Italians, who now face a hungry Sweden team looking for its first win of the tournament.

Italy made a statement at Euro 2016 after its clean sheet triumph over Belgium — a victory that sent shockwaves through the soccer world.

The Italians, who are missing key players due to injuries, will look to keep rolling when they face world-class striker Zlatan Ibrahimovic and Sweden on Friday.

Italy was not expected to come out with the win in the opener against Belgium, let alone blank the No. 2 team in the world.

They enter Friday’s Group E match as the favorites, but Italy is not taking Sweden lightly.

“Maybe they have less talent than Belgium, so they will probably wait in their half and try to play counterattack with long balls,” Italian midfielder Daniele De Rossi told eurosport.com.

Much like their opening win, Italy will look to take an early lead then rely on its strong defensive unit — Giorgio Chiellini, Leonardo Bonucci and Andrea Barzagli — to hold off the Swedes.

Bovada has set a line of +245 that Italy will win by a one-goal margin. The online sportsbook also has Italian striker Graziano Pelle at +250 to score the Azzurri’s opening goal.

As always, Ibrahimovic, who was quiet in Sweden’s opening 1-1 draw against Northern Ireland, will be a threat to the Italian defense. Bovada has the lanky striker at +550 to net the match’s opening goal — a bet worth considering as Ibrahimovic has 62 career tallies for Sweden.

Italy will be riding high after such a big victory and will squeak out another against the Swedes.

Croatia hung on to narrowly escape their Group D opening match with a 1-0 victory over Turkey. The road to the knockout stages won’t get much easier for the Croatians, who now have a date with the Czech Republic on Friday.

Real Madrid midfielder Luka Modric scored what is being touted as the goal of the tournament thus far to lift Croatia to an opening victory. He will once again be one of Croatia’s options to score against the Czechs, who are coming off a defeat against Spain.

Croatia is +260 favourites to defeat the Czechs by a one-goal margin, according to Bovada’s line. The online sportsbook also has Croatia at -165 to open the scoring and +325 for it to happen within the first 10 minutes of the match. 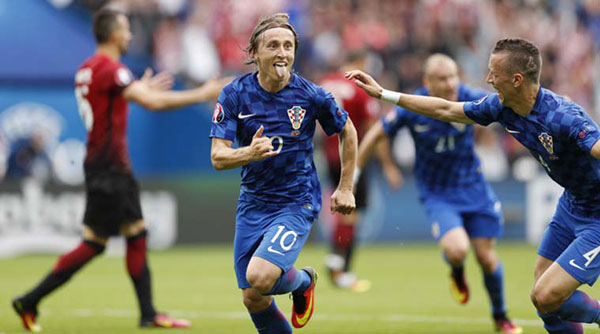 Mario Mandzukic is favored to net the first goal of the match as Bovada has the Croatian striker at +250 to open the scoring.

The Czech Republic’s best offensive threat will once again be striker Tomas Necid, who is at +375 to score at any point of the match.

While Croatia is favored to win, Bovada has a +245 line for a draw — a realistic outcome as both sides are evenly matched.

Spain was tested in its opening match, but still walked away with a 1-0 victory over the Czech Republic. The two-time defending European champions will get back to work on Friday with a match against Turkey.

Spain is pegged at +310 to win by a two-goal margin — not a bad bet considering Turkey allowed nine goals in 10 qualifying matches.

Manager Vicente del Bosque opted to sit veteran goalkeeper Iker Casillas in Spain’s opening match in favor of Manchester United’s David de Gea. While it’s uncertain who will get the call in net next, Bovada has a -105 line that Spain will blank the Turks.

“It’s my duty to be discreet until the last minute,” Del Bosque told eurosport.com when asked which goalkeeper will start against Turkey.

Both Alvaro Morata and Aritz Aduriz are +325 favorites to score the match’s opening goal according to the Bovada odds.

Turkey will be searching for its first goal of the tournament and will look no further than Burak Yilmaz to provide it. Bovada has the foward at +400 to score his team’s first marker.

Spain should have no problems getting past Turkey and taking full command of the Group D standings.